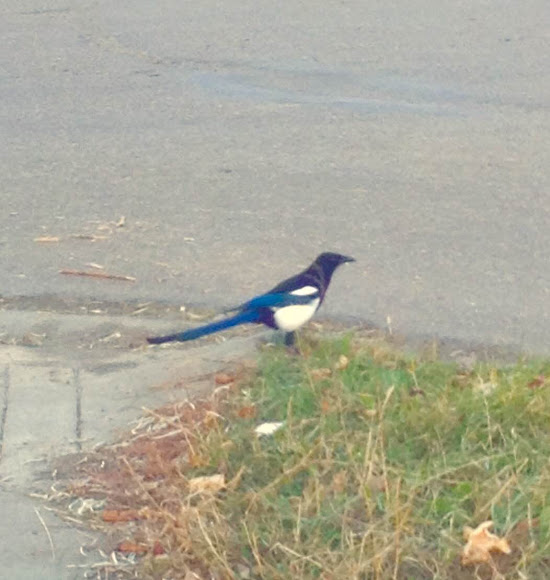 The males are usually 6-9% larger and weigh 16-20% more compared to the females. There are a lot of different subspecies for this bird, the northwest African differs in having a patch of bare blue around the eye, the southwest Arabian subspecies is smaller and lacks iridescent tones, Siberian races have more extensive white in the wings and a green iridescence. The American crow (Corvus brachyrhynchos) is a large passerine bird species of the family Corvidae. It is a common bird found throughout much of North America and shares the same environment as the Eurasian Magpie. The Common Raven lives in the same environment as the American Magpie and is also known as the northern raven. It is a large all-black passerine bird found across the Northern Hemisphere, it is the most widely distributed of all corvids. Magpies and the Common Raven are both scavengers and hunt the same types of food in the same areas. The Common Raven and American Magpie's symbiotic relationship is interspecies competition, they eat the same type of foods and scavenge for dead animals and living things. The more food the American Magpies eat, the less food for the Common Raven which leads to less Ravens in that area or fighting between the two species. The American Magpie doesn't really have any special design to help them adapt in Edmonton but their body type is more built for speed and agility. Their wings help them maneuver fast and their body shape helps for speed. Some individuals of this species moves down to the south for warmer climate when winter comes so they don't really need much feathers for the winter because of how they behave in the winter. They go in groups to find a roosting location to keep them safe from their predators and to keep them warm from the cold winter wind. They do not huddle, they tend to occupy trees singly. Magpie pairs stay together year-round and often for life unless their partner dies in which case, the magpie finds another mate. They reproduce by sexual reproduction and the female lays eggs. The first or second year is when the new magpies start to mate.

Black-billed magpies often live in open country with thickets and scattered trees, especially riparian groves. They can be found near farms and within cities and suburbs. Dry open pine forests are another possible habitat. The black-billed magpie is an omnivore eating many types of insects, carrion, seeds, rodents, berries, nuts, eggs, and also garbage and food from pets that are fed outside. Chicks are mostly fed animal matter. They often follow large predators (like wolves) and scavenge from their kills or steal from it. When they find an abundant food source, magpies will cache food for short periods. It is susceptible to the West Nile virus. Bigger birds like eagles or hawks that are carnivores or omnivores will most likely hunt this bird down if they can get the chance to but they usually do not. They observe their environment and looks for chances to get food with the least amount of effort and usually follow bigger predators, like wolves, and steal from their kills. They usually hang around at the top of trees in order to get a good observation point to defend their territory and look for food. They are scavengers which often means that they usually clean up dead animal matter that hasn't decomposed yet and still has edible flesh cleaning the environment while they're eating.