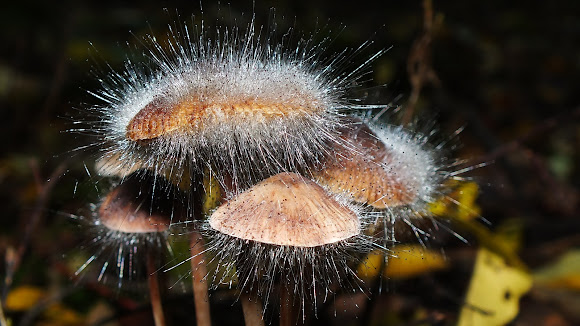 This very common little parasite of Mycena species, and of several other mushroom genera, is known as a pin mould. It appears on the caps of larger fungi as erect pale brownish-yellow sporangiophores on which its zygospores are produced. Bonnet mould and the other members of the Spinellus genus are able to reproduce when pins from the same mycelium contact one another, such fungi are termed homothalic.

This species occurs across Europe as well as in Asia and North America. Spinellus fusiger is a parasitic fungus seen on bonnet mushrooms.

Many thanks for the kind comments, dcslaugh and Ashley :)

Congrats Jae! Such a neat spotting :)

That's wonderful news, Lisa, thank you :)
Thanks PN members for the likes! And Mark, armadeus.4 and Marta thank you for the kind comments. It's very much appreciated.

Congratulations on the SOTW

Congrats Jae! This spotting has been chosen by our PN Ranger team as our Spot of the Week! Thanks for sharing and keep up the great work!

Thank you for the comment, Ashley. It's such an honor to be nominated.