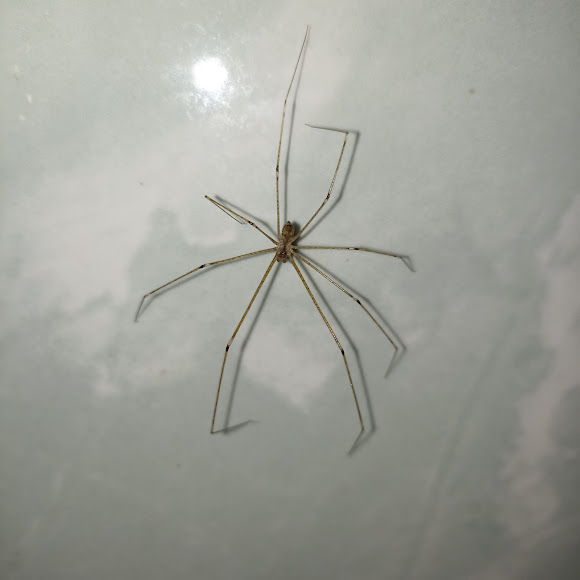 These spiders are famous for their extremely long, fragile legs and delicate bodies. The abdomen of this species is angular compared to other Pholcidae species and has a pointy squarish rear end hence its name "tailed". This specimen I photographed isn't really that impressive compared to others I have seen but I decided to photograph it because it just happened to be there, they will usually grow bigger than this. The specimen is most likely male due to its noticeable huge pedipalps and small abdomen. They ain't really the prettiest spiders as they only consist of browns, black and white.

This photographed specimen was spotted on the bathroom wall, they are extremely common and as of typing this there are probably a few dozen in my room. They have been introduced all over the world, mostly in tropical regions.

People usually don't mind them and are sometimes appreciated because they eat mosquitos, flies, and small insects, but they can also be a nuisance because they built messy webs that are unpleasant to look at. They have a lot of common names but they are especially known as "daddy long-legs" in western countries. Here in our place, we call them "gunting-guntingan" which translates to "scissors-scissors", I have no idea how they got the name but I presume it might be due to how they fight other spiders using their long legs as an advantage. There is also a popular myth that these spiders have venom stronger than those of black widows, which in fact is absolutely false, they are completely harmless and have jaws too small and weak to ever penetrate a human skin also there's no evidence that they contain venom.