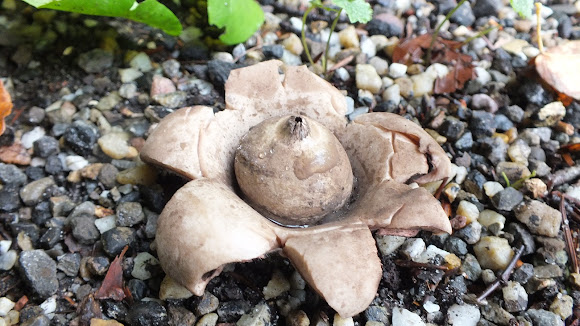 Collared Earthstars are larger than other earthstar species, and they have a spore-sac diameter up to 5cm and arms that span twice that distance when fully outstretched. A flattened spherical spore-sac holds the powdery gleba with which the spores are distributed. As with other earthstars, the bulb is mounted on a star-shaped base, but Geastrum triplex is commonly referred to as the Collared Earthstar because in many instances the arms crack as they bend, with the result that the spore-sac seems to be sitting on a separate saucer-like layer. There is no stem. The number of star rays is very variable. A pointed hole, known as a peristome, on the top of the sac releases spores when the wind blows across it or raindrops impinge upon it. The sides of the peristome are fibrous and appear rather ragged but not regularly striate, and the peristome is surrounded by a fuzzy ring slightly paler fawn-brown than the rest of the spore-sac outer surface.

Found under hardwood and coniferous trees, often on sloping rather than flat ground.