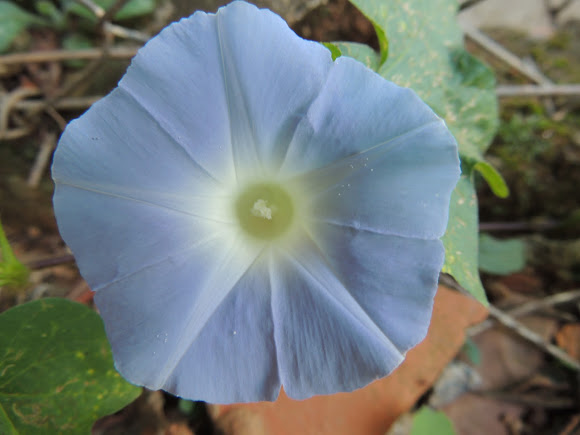 Herbaceous perennial climber. Stems twining, up to 3.5 m long. Leaves large, broadly ovate-heart-shaped, narrowly pointed at the apex. Inflorescences, axillary, few to many-flowered. Corolla funnel-shaped, 6-9 cm in diameter, usually blue with a white centre but many cultivars with other colours are known.

The seeds, vines, flowers, and leaves contain ergoline alkaloids, and have been used for centuries by many Mexican Native American cultures as an entheogen; they were known to the Aztecs as tlitliltzin, the Nahuatl word for "black" with a reverential suffix. In South America, the seeds are also known as "badoh negro".

Those long thin sepals are characteristic of Ipomoea nil .

Thanks for help, people! ;)

It's a morning glory! I've grown them, so I know what it looks like.

Could it be Larger bindweed (http://en.wikipedia.org/wiki/Larger_bind...