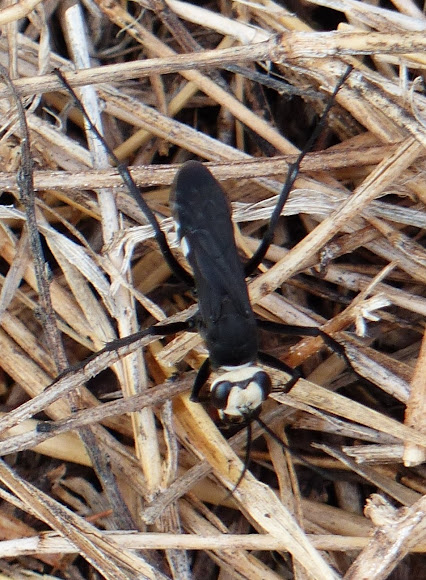 Black and white insect(between 1" (2.5cm) - 1.6" (4cm)). As it walked around it was constantly flapping its wings (Check out on this little video: https://youtu.be/HI-1mTJpsj8 )..."Spider wasps have a habit of flicking their wings on landing and moving with a jumping motion. The wasp does this when searching for a spider in bark, cracks, crevices or soil." (australian museum) My description: ...kind of like using the black wings to display the body (black and white striped like a bee) at random intervals...like sending a signal.

Around the edge of the waste water treatment wetlands.

All of the pics are blurry because this little critter just didn't stop still :) I reckon this might be a female who is searching for a spider to paralyse and drag back to the burrow... Thank you bayucca for the identification!!! :) Interesting read from australian museum: "Life cycle The spider wasps you are most likely to see and hear are female wasps preparing nest chambers for their larvae. They dig a burrow using long spines on their front legs, then search rapidly around tree trunks and on the ground for a spider. On finding the spider, which may be as large as a huntsman or funnel-web and twice as heavy as itself, the wasp stings and paralyses it, and then drags or flies it back to the burrow. She then lays an egg on the spider's body, and seals it in a chamber or cell at the end of the burrow. The larva hatches and feeds on the body of the spider before pupating in a thin silky cocoon in the cell. Some spider wasps sting the spider and lay an egg on it but do not dig a burrow to put it in. The spider is left where it was stung and the larva hatches and eats the spider. A small number of Spider Wasps steal spiders from other Spider Wasps for their own larva. This behaviour is known as klepto-parasitism (klepto: Ancient Greek for 'theft')." (australian museum) I seem to be coming across parasitic organisms of late...though only a few. Reference: https://www.flickr.com/photos/65796382@N... Reference: http://anic.ento.csiro.au/INSECTFAMILIES...

Thank you bayucca for the identification!!! :)

Sure thing :) That was just a guess, in California the tarantula hawk wasps have very similar body shape to this one. The legs seem like they could be well adapted to gripping prey but again just a guess... Good luck!

Well...I just learned that Australia has tarantulas! I have heard of them called by other names: Barking Spider or Bird-eating Spider - but I didn't know they were tarantulas! I will keep looking but haven't found one that is black and white...Thanks for the idea thrownshuriken!

Tarantula hawk wasp of some sort?

Oo...Could this be a Zebra Spider Wasp or Zebra Wasp or something? Am I on the right track?