Channel-billed Cuckoo being fed by Raven 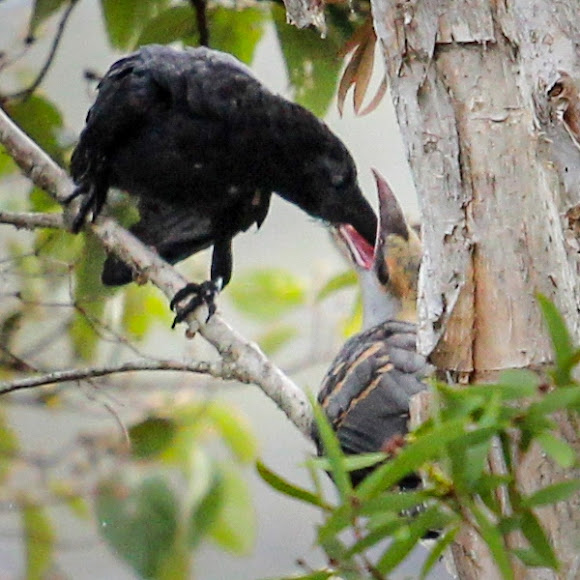 This series shows a young Channel-billed Cuckoo being fed by its adopted parent (a Raven or Crow - I find it very difficult to tell the difference). I first noticed the baby in a neighbour's tree this morning... I heard it calling, but when I spotted it I didn't realise it was a baby because it was HUGE. It was quite some distance away and at first I thought it was a Common Koel (another member of the Cuckoo family) as I had seen a female Koel in that tree before. Then this raven came down and instead of attacking the cuckoo, as I expected, it started feeding it!!! (The juvenile was bigger than the adult!) It wasn't until I got inside and looked at the photos that I was able to make the ID on the juvenile. The Channel-billed Cuckoo is the largest parasitic cuckoo in the world; therefore it chooses to lay its eggs in the nests of host species that are almost equally as large, including magpies, currawongs, ravens, crows, and even brown falcons. As the babies grow to maturity they out-compete the babies of the host species. The shots are poor quality due to the distance, but this was an exciting spotting for me. : )

Great find! Gosh the adult cuckoo is a solid looking bird isn't it.

This is very cool!

Oh, that's cool kd!! Bold things, aren't they?? This one is still pretty young, it makes the most horrible noises when it has to move between trees. I did get some better shots of it yesterday when it moved to a closer tree, I'll have to add one here.

Fantastic! They are difficult to get good shots of. A baby abandoned by its adoptive parents probably due to its enormous size took up residence at the local pub near here and became a bit of a celebrity until it took its cue from other adult Channel Bills flying around during the season and promptly left, probably heading back to New Guinea! The baby helped itself inside the pub bar & sat on a bar stool each day.