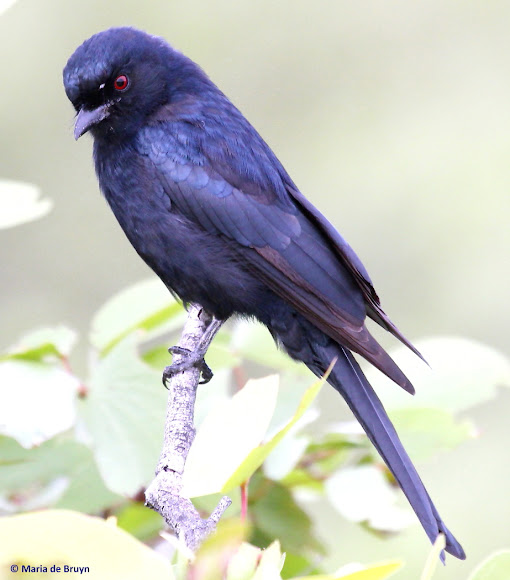 These are aggressive and fearless birds, given their small size, and will attack much larger species, including birds of prey if their nest or young are threatened. Two to four eggs are laid in a cup nest in a fork high in a tree. The male is mainly glossy black, although the wings are duller. It is large-headed and has the forked tail which gives the species its name. The female is similar but less glossy. The bill is black and heavy, and the eye is red.

The first two photos were taken in the afternoon and the others in the evening when it started to rain. The bird began singing away in the rain.

Thank you, Yuko; I agree that it was beautiful. Thanks for your comment, Malcolm; I had increased the contrast a bit in all the photos but it doesn't account for the difference in color of the photos. As mentioned, they were taken at different times of the day; I rely on auto-focus and don't change settings to compensate for lighting, etc; as I recall, this bird was very blue; I first thought it was a starling.

The colours look more natural in the 3rd and especially the 4th picture. The blueish tinge is usually the result of the auto white balance getting it slightly wrong on a cloudy day, a common fault with many cameras. Drongoes and Dollarbirds, and many other birds, do have a bluish tinge in certain lighting conditions when seen with the naked eye but rarely as marked as some of these pictures. My opinion only!

Beautiful bird with a pair of sunning ruby eyes!