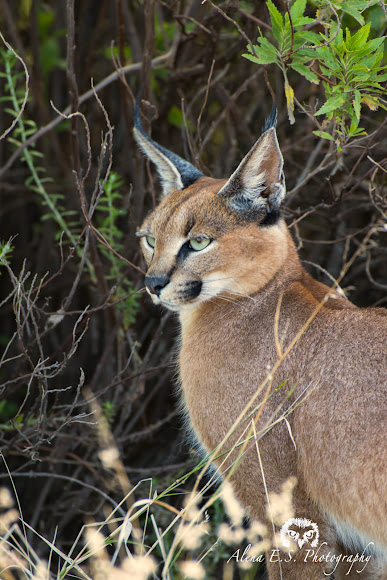 Portrait of a wild caracal in South Africa's Eastern Cape!

We saw this beautiful caracal in South Africa's magical Eastern Cape. Caracals can be found in much of Africa and Asia in a variety of habitats, including savannah, forested areas, or scrublands.

This individual was travelling by the side of the road in a semi-forested area in the Eastern Cape shortly before sunset. It was a wonderful moment that I will never forget, and feel very honoured to have witnessed! Photo: Wild Caracal (Caracal caracal) - South Africa - September 2015 Connect with me: Facebook: facebook.com/alenasphotography Twitter: twitter.com/AlenaESPhoto Website: www.alenaesphotography.com © Alena Ebeling-Schuld

very enchanting animaolit is so cute

I just love it

Thanks so much everyone!

Great capture LivesInADream,congrats on the well deserved SOTD and thanks for sharing

Congratulations on your SOTD! What a beautiful animal.

Congratulations for your lovely Spotting of the day! This honor is well deserved!

Congratulations! What an incredible experience. Thank you for sharing :)

Congratulations on your SOTD!
Great photograph!

Congrats, this handsome Caracal has been chosen as Spotting of the Day!

Hi Kathleen! I have added some more field notes and the scientific name, let me know if they are adequate!

Hi Alena! I love your portrait of the Caracal. Could you please enter the scientific name in the proper field and add some field notes like details about this encounter? that would be great! I would like to nominate it for SOTW but there is not enough information supplied here about the spotting. Thanks!