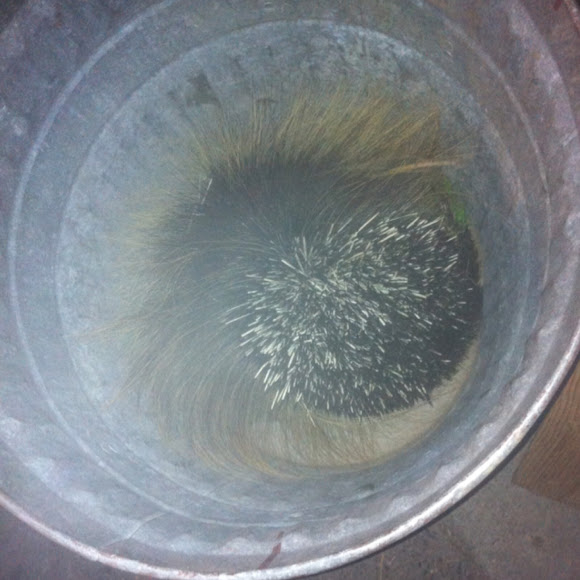 The North American porcupine (Erethizon dorsatum), also known as the Canadian porcupine or common porcupine, is a large rodent in the New World porcupine family. The beaver is the only other larger rodent in North America. The porcupine is a caviomorph rodentwhose ancestors rafted across the Atlantic from Africa to Brazil over 30 million years ago, and then migrated to North America during the Great American Interchange after the Isthmus of Panama rose 3 million years ago.[4] They range from Canada, Alaska, and into northern Mexico. They are commonly found in coniferous and mixed forested areas, but have adapted to harsh environments such as shrublands, tundra, and deserts. They make their dens in hollow trees or in rocky areas. Porcupines are usually dark brown or black in color, with white highlights. They have a stocky body, a small face, short legs, and a short, thick tail. This species is the largest of the New World porcupines and is one of the largest North American rodents, second only to the American beaver in size. The head-and-body length is 60 to 90 cm (2.0 to 3.0 ft), not counting a tail of 14.5 to 30 cm (5.7 to 11.8 in). The hind foot length is 7.5 to 9.1 cm (3.0 to 3.6 in). Weight can range from 3.5 to 18 kg (7.7 to 39.7 lb), although they average about 9 kg (20 lb).[10][11] The porcupine is the only native North American mammal with antibiotics in its skin. Those antibiotics prevent infection when a porcupine falls out of a tree and is stuck with its own quills upon hitting the ground. Porcupines fall out of trees fairly often because they are highly tempted by the tender buds and twigs at the ends of the branches. The porcupine, wolverine, and the skunk are the only North American mammals that have black and white colours because they are the only mammals that benefit from letting other animals know where and what they are in the dark of the night.[12]

He's hiding his head underneath