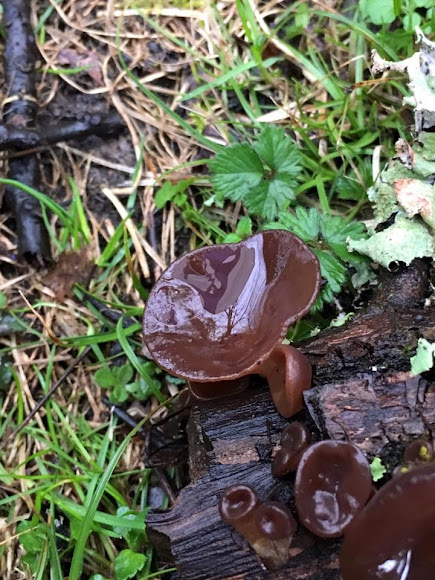 The common name for this fungus, the "Jelly Ear," is very appropriate--a rarity with common names in English. Just take a look at the photos to the right, and you can see why people think Auricularia auricula looks like the missing part of a Van Gogh self portrait. Unlike the cup fungi, this fungus has jelly-like flesh, and its spores are catapulted from little spore-holders, placing it in the Basidiomycetes rather than in the Ascomycetes, where spores are forcibly shot out of little spore-jets. Ecology: Saprobic on decaying hardwood and conifer sticks and logs; spring, summer, and fall (sometimes even in winter); widely distributed in North America. Fruiting Body: Wavy and irregular; typically ear-shaped; 2-15 cm; gathered together and attached at a central or lateral position; fertile surface (usually the "downward" one) gelatinous, tan to brown; sterile surface (usually the "upper" one) silky to downy, veined, irregular, brown; flesh thin, gelatinous-rubbery.

Growing (along with some lichens & mosses) on a dead tree limb in my yard.

You’re welcome Sarah! I just found it out recently when someone corrected my spotting on Mushroom Observer ;P

OH....Thanks, Christine!! I just looked up JELLY EAR!!
I will change my scientific name!!

Nice spotting! I think that the current correct taxonomy for the North American species of Wood Ear is considered to be Auricularia angiospermarum. Recent studies show that Auricularia auricula-judae is not endemic to North America.