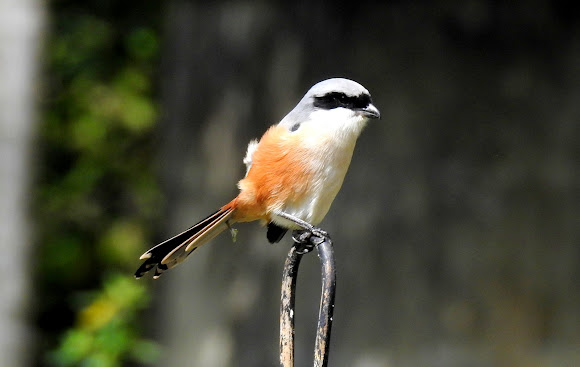 The long-tailed shrike is a typical shrike, favouring dry open habitats and found perched prominently atop a bush or on a wire. The dark mask through the eye is broad and covers the forehead in most subspecies and the whole head is black in subspecies tricolor and nasutus. The tail is narrow and graduated with pale rufous on the outer feathers. Subspecies erythronotus has the grey of the mantle and upper back suffused with rufous while the southern Indian caniceps has pure grey. A small amount of white is present at the base of the primaries. The bay-backed shrike is smaller and more contrastingly patterned and has a more prominent white patch on the wing. The sexes are alike in plumage.