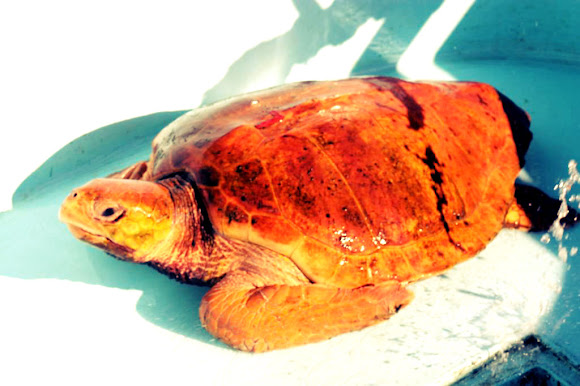 "Loggerhead turtle" redirects here. Loggerhead turtle may also refer to Loggerhead musk turtle. Loggerhead sea turtle Temporal range: 40–0Ma PreЄ Є O S D C P T J K Pg N Cretaceous - Recent[1] A loggerhead sea turtle in an aquarium tank swims overhead. The underside is visible. Conservation status Endangered (IUCN 2.3)[2] Scientific classification Kingdom: Animalia Phylum: Chordata Class: Reptilia Subclass: Anapsida Order: Testudines Superfamily: Chelonioidea Family: Cheloniidae[3] Genus: Caretta Rafinesque, 1814 Species: C. caretta Binomial name Caretta caretta (Linnaeus, 1758) Loggerhead sea turtle range Species synonymy[show] Genus synonymy[show] The loggerhead sea turtle (Caretta caretta), or loggerhead, is an oceanic turtle distributed throughout the world. It is a marine reptile, belonging to the family Cheloniidae. The average loggerhead measures around 90 cm (35 in) long when fully grown, although larger specimens of up to 279.4 cm (110.0 in) have been discovered. The adult loggerhead sea turtle weighs approximately 135 kg (300 lb), with the largest specimens weighing in at more than 454 kg (1,000 lb). The skin ranges from yellow to brown in color, and the shell is typically reddish-brown. No external differences in gender are seen until the turtle becomes an adult, the most obvious difference being the adult males have thicker tails and shorter plastrons than the females. The loggerhead sea turtle is found in the Atlantic, Pacific, and Indian Oceans, as well as the Mediterranean Sea. It spends most of its life in saltwater and estuarine habitats, with females briefly coming ashore to lay eggs. The loggerhead sea turtle has a low reproductive rate; females lay an average of four egg clutches and then become quiescent, producing no eggs for two to three years. The loggerhead reaches sexual maturity within 17–33 years and has a lifespan of 47–67 years.[6] The loggerhead sea turtle is omnivorous, feeding mainly on bottom-dwelling invertebrates. Its large and powerful jaws serve as an effective tool for dismantling its prey. Young loggerheads are exploited by numerous predators; the eggs are especially vulnerable to terrestrial organisms. Once the turtles reach adulthood, their formidable size limits predation to large marine animals, such as sharks. Loggerheads are considered an endangered species and are protected by the International Union for the Conservation of Nature. Untended fishing gear is responsible for many loggerhead deaths. Turtles may also suffocate if they are trapped in fishing trawls. Turtle excluder devices have been implemented in efforts to reduce mortality by providing an escape route for the turtles. Loss of suitable nesting beaches and the introduction of exotic predators have also taken a toll on loggerhead populations. Efforts to restore their numbers will require international cooperation, since the turtles roam vast areas of ocean and critical nesting beaches are scattered across several countries.

This turtle was caught in a fishing net off French Scattered Islands in the Indian Ocean, recovered by Kelonia (Centre for research and discovery of marine turtles) on Reunion Island, it will be restored in its natural environment with the presence of academic and scientific.

Beautiful, and a great rescue story! You might like to add it to the Wildlife Rescue & Rehabilitation Mission at http://www.projectnoah.org/missions/9974... : )

Thank you for the information!

This turtle was caught in a fishing net off French Scattered Islands in the Indian Ocean, recovered by Kelonia (Centre for research and discovery of marine turtles) on Reunion Island, it will be restored in its natural environment with the presence of academic and scientific.