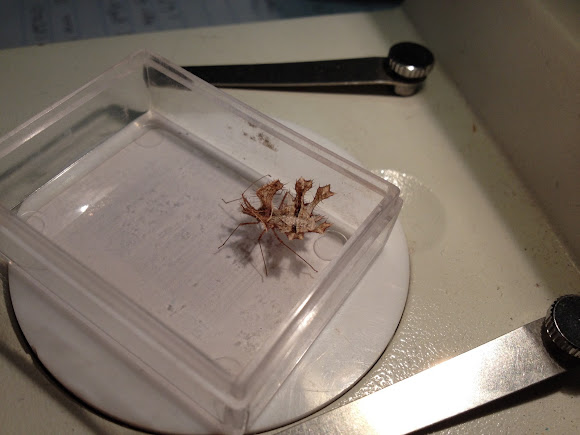 An insect a little more than a centimeter long, with large flat projections along the sides of its exoskeleton with small spikes along the edges. A light brown in colour, with darker brown markings. Relatively small eyes on a slightly elongated head with long antennae which have small hairs and spines on them.

Found under a bauhinia in the dead leaves and small-ish stones.

Pephricus sp. I Speak For The Fleas.: Fantastic creature at AISM: Pephricus sp in the family Coreidae.

Sorry, there was a typo in my previous comment. It was supposed to read: nor have I heard of it.

Thank you to Mr. Heyns, it is apparently a twig wilter, although I have never seen this type of insect in our area (nor have i hea of it).

Jessica, do you have any closer picture? Can you, please, make a crop of #1?

I'm leaning towards an assassin bug because they are sometimes very ornate.

Amazing creature!
I have seen something like this before but unfortunately I forgot it's ID.
It would be better if you can crop the pictures for a better close up photo.

Wow, what an interesting insect! I hope you receive an ID for this one.