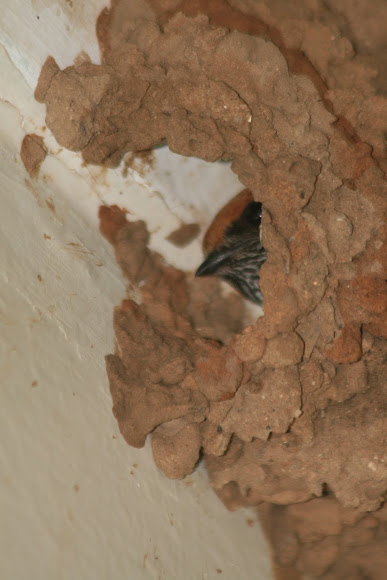 The Lesser Striped Swallow is a large swallow. It breeds in sub-Saharan Africa from Sierra Leone and southern Sudan south into eastern South Africa. It is partially migratory with South African birds wintering further north. West African birds leave the north of the breeding range in the dry season. The eggs are glossy white sometimes with a few brown spots; three eggs is a typical clutch. Incubation is by the female alone for 14–16 days to hatching. Both parents then feed the chicks. Fledging takes another 17–19 days, but the young birds will return to the nest to roost for a few days after the first flight. Lesser Swallow is 15–10 cm long. It has dark blue upperparts with a red rump and a rufous-chestnut crown, nape and sides of the head. The underparts are white with dark streaking, and the upper wings and underwing flight feathers are blackish-brown. The underwing coverts are tawny. The blackish tail has very long outer feathers; these are slightly longer in the male than the female. Juveniles are duller and browner, with less contrast and shorter outer tail feathers. There are five or six subspecies differing in the extent of the underpart streaking Lesser Striped Swallow has heavier and darker underparts striping, a deeper red rump, and a brighter head colour than the larger Greater Striped Swallow. Lesser also prefers less open habitats.

This is a bird of wooded, mainly lowland habitats, and is replaced in montane grassland by the Greater Striped Swallow, Hirundo cucullata. It is often found around human habitation. The Lesser Striped Swallow builds a bowl-shaped mud nest with a tubular entrance on the underside of a suitable structure. The nest has a soft lining, and may be reused in later years. The nest may be built in a cave or under a rock overhang or a tree branch. This species has benefited from its willingness to use buildings, bridges, culverts and similar structures. Given the choice, it will select a high nest site.

Lesser Striped Swallow is common, and has benefited from the availability of nest sites around habitation. It feeds mainly on flying insects, but has been known to eat small fruits. The flight is erratic, and the call is a nasal zeh zeh zeh zeh zeh

I love the last picture and all the information as well.