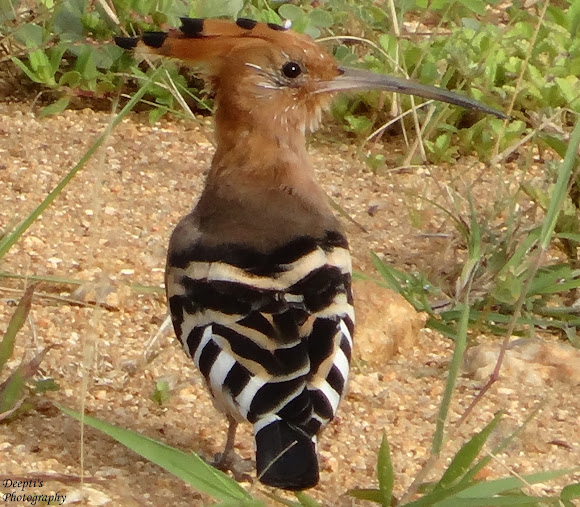 The Hoopoe is a colourful bird, notable for its distinctive ‘crown’ of feathers. It is the only extant species in the family Upupidae.

The Hoopoe is a medium-sized bird. The species is highly distinctive, with a long, thin tapering bill that is black with a fawn base. The strengthened musculature of the head allows the bill to be opened when probing inside the soil. The diet of the Hoopoe is mostly composed of insects, although small reptiles, frogs and plant matter such as seeds and berries are sometimes taken as well. Hoopoes have well-developed anti-predator defences in the nest. The uropygial gland of the incubating and brooding female is quickly modified to produce a foul-smelling liquid, and the glands of nestlings do so as well. These secretions are rubbed into the plumage. The secretion, which smells like rotting meat, is thought to help deter predators, as well as deter parasites and possibly act as an antibacterial agent. The secretions stop soon before the young leave the nest. From the age of six days, nestlings can also direct streams of faeces at intruders, and will hiss at them in a snake-like fashion. The young also strike with their bill or with one wing. Hoopoes were considered sacred in ancient world.

Thank you for the nomination, Ashley!