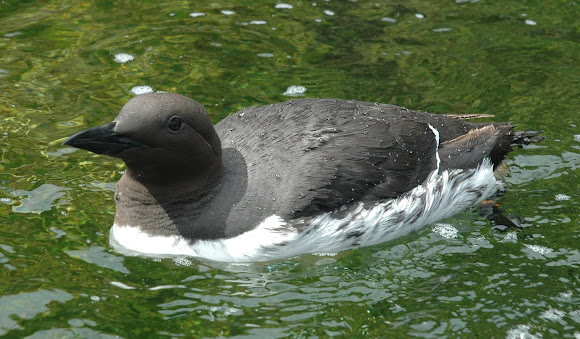 The common murre is 38–46 cm (15–18 in) in length with a 61–73 cm (24–29 in) wingspan. Male and female are indistinguishable in the field and weight ranges between 945 g (2.083 lb) in the south of their range to 1,044 g (2.302 lb) in the north. A weight range of 775–1,250 g (1.709–2.756 lb) has been reported. In breeding plumage, the nominate subspecies (U. a. aalge) is black on the head, back and wings, and has white underparts. It has thin dark pointed bill and a small rounded dark tail. After the pre-basic moult, the face is white with a dark spur behind the eye. Birds of the subspecies U. a. albionis are dark brown rather than black, most obviously so in colonies in southern Britain. Legs are grey and the bill is dark grey. Occasionally, adults are seen with yellow/grey legs. In May 2008, an aberrant adult was photographed with a bright yellow bill. — Wikipedia

The breeding habitat is islands, rocky shores, cliffs and sea stacks. Ocean, large bays; colonies on sea cliffs. Favors cool ocean waters, both offshore and rather near coast, generally over continental shelf. Unlike Thick-billed Murre, tends to avoid areas of pack ice. Nests on coasts and islands, on ledges of cliffs and on flat bare rock atop sea stacks. Widespread on Pacific Coast from Alaska to California, but more local in the east, being found mainly off eastern Canada. This large auk sits upright on sea cliffs, looking like a northern version of a penguin. It swims and dives expertly, but its flight appears labored. For its size, the Common Murre has the most densely packed nesting colonies of any bird species; nests may be so close together that incubating adults are actually touching other adults on both sides. — Audubon.org