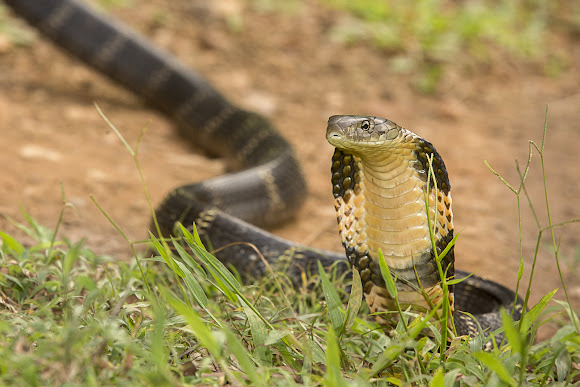 The king cobra (Ophiophagus hannah) is an elapid found predominantly in forests from India through Southeast Asia. This species is the world's longest venomous snake, with a length up to 18.5 to 18.8 ft (5.6 to 5.7 m). Despite the word "cobra" in its common name, this snake is not a member of the Naja genus ("true cobras"), which contains most cobra species, but the sole member of its own genus. It preys chiefly on other snakes and occasionally on some other vertebrates, such as lizards and rodents. The king cobra is considered to be a dangerous snake and has a fearsome reputation in its range, although it typically avoids confrontation with humans if possible. It is also considered culturally significant, with many legends and associations with Hindu gods around it in some Indian subcontinent cultures.

The king cobra is distributed across the Indian subcontinent, Southeast Asia, and the southern areas of East Asia (where it is not common), in Bangladesh, Bhutan, Burma, Cambodia, China, India, Indonesia, Laos, Nepal, the Philippines, Singapore, Thailand, and Vietnam. It lives in dense highland forests, preferring areas dotted with lakes and streams. King cobra populations have dropped in some areas of its range because of the destruction of forests and ongoing collection for the international pet trade. It is listed as an Appendix II animal within CITES.

A wild King Cobra which was rescued by the authorised Snake Rescue experts from Kalinga Centre for Rainforest Ecology.

Extraordinary! What a shot! I just want to echo what Ashley has requested concerning the habitat. That's actually what we're after, to know about the specific habitat of the spotting. That's what makes a spotting unique and adds scientific value to it. Thanks!

What a beautiful photo! It would be great if you could put in the habitat section the habitat you actually found this individual in instead of its range and general habitat info. Would be much more useful and interesting :)

Welcome to Project Noah IsmailShariff
Awesome first spotting,congrats and thanks for sharing
We hope you like the site as much we do; there are many features you can explore:
We invite you to go to http://www.projectnoah.org/faq where you will find the purpose and “rules” of Project Noah.
There is a blog http://blog.projectnoah.org/ where we post articles from spotters with special insight into different organisms.
Look at the global and local missions to put your spottings into: http://www.projectnoah.org/missions
Enjoy yourself,see you arround :)