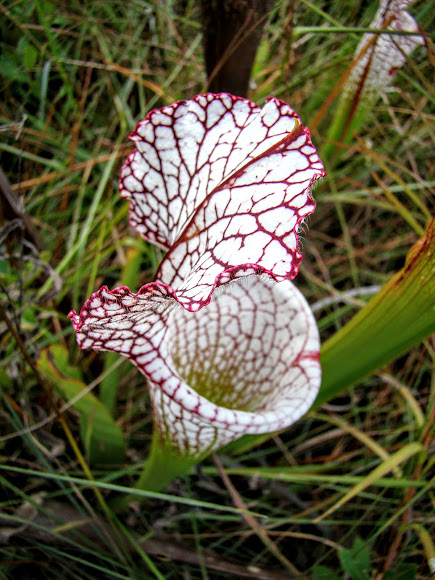 Spotted in Crawford Bog, Conecuh National Forest, AL. One of the most beautiful and flamboyant of all pitcher plants, the white-topped pitcher plant is a carnivorous plant whose highly modified leaves, or ‘pitchers’, act as pitfall traps to catch prey.

The white-topped pitcher plant occurs in the southeastern United States, where it ranges from northwest Florida to southwest Georgia, and west through Alabama, just into Mississippi. The species was thought to have become extinct in Georgia until it was rediscovered at a single site in 2001.

Beautiful and cool find marylou.wildlife,congrats on the well deserved SOTD and thanks for sharing

Thank you all so much! I am glad these plants are so appreciated here. I am also very honored to be a part of a community who truly cares for the worlds flora and fauna!!

@marylou ~ I am actually glad you didn't smell anything :D

Lovely spotting and series! Congrats on your well deserved SOTD!!!

Congrats marylou.wildlife! This spotting has earned the SOTD! We are so fortunate to have you as a contributor and user of PN. Thanks!

Thank you all! It was amazing to see so many of them doing so well in this particular bog. Armadeus, nectar is produced by glands around the top of the pitcher, luring animals to the opening with its sweet smell. However, I took a whiff of one and didn't smell anything. Perhaps my senses are not strong enough :)

Beautiful plant. It's exciting to know that it was rediscovered in Georgia! I hope, 14 years on, it is still there and flourishing. Thank you for the information and for sharing :) I'm curious...being a carnivorous plant...does it smell at all?

Absolutely wonderful to see, thank you!