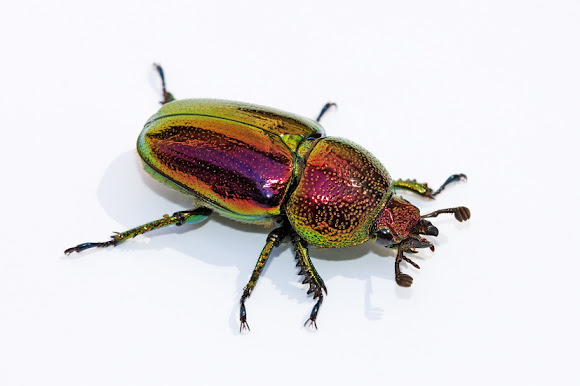 Discovery of femal Golden Stag beetles (Lamprima latreillii). Golden stag beetles are very beautiful and elusive insects. In the past 8 years, ever since I became aware of the existence of such interesting creatures in Brisbane, I have only managed to find the dead bodies of two males. Information on their lives is scant on the internet and although I always went out of my way to look for them every summer, I had absolutely no success. A huge breakthrough came when I was told by a fellow hobbyist that golden stag beetle larvae prefer Sheoak tree. The key to finding them is to find the right tree. Armed with this critical knowledge, I went to a local park where there were a large number of Sheoak trees growing. It didn’t take long before I found a rotten Sheoak tree trunk lying in very humid and shady bush. In that rotten log, I found 4 female golden stag beetle pupae and two of them emerged one day after I took them home. One of them is red form, the other blue. Females of golden stag beetles come in different colours, with red and blue being most common.

Awesome spotting HongmingKan,congrats on the well deserved SOTD and thanks for sharing

Wonderful! Congratulations on SOTD and your persistence. They are beautiful.

Thanks heaps. I am so glad my spotting has been chosen as Spotting of the Day!

Congrats HongmingKan, these beautiful beetles have been chosen as Spotting of the Day! Thanks for sharing your story with us too, always exciting to read about the find along with some great photos!