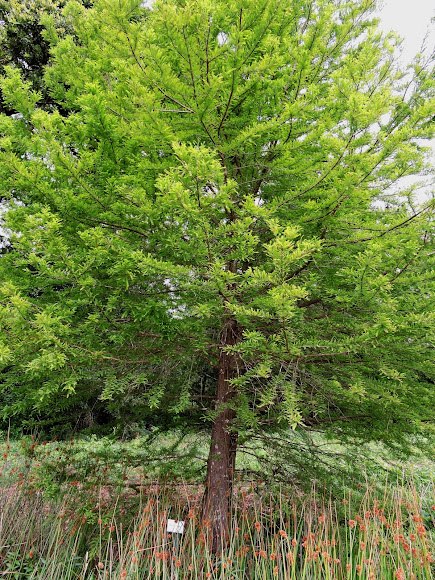 I'd like to vote this as the coolest tree! Here are some fun facts per the wiki : In 2002, the Indiana Department of Natural Resources identified T distichum as a state protected plant with the status of Threatened. The Corkscrew trees are around 500 years of age and some exceed 40 m in height. The Black River trees were cored in 1986 by University of Arkansas dendrologists with dates ranging back to 364 AD The tallest known individual specimen, near Williamsburg, Virginia, is 44.11 m tall, and the stoutest known, in the Cat Island National Wildlife Refuge near Baton Rouge, Louisiana, has a diameter at breast height (DBH) of 521 cm.[4] The oldest known specimen, located in Bladen County, North Carolina, is over 1,620 years old, making this one of the oldest living plants in eastern North America.[6] In 2012 Scuba divers discovered an underwater forest several miles off the coast of Mobile, AL in 60 feet of water. The forest contains trees that could not be dated with radiocarbon methods since they are older than 50,000 years old, thus most likely lived in the early glacial interval of the last ice age. The forest contains trees so well-preserved that when they are cut, they still smell like fresh Cypress. The team, which has not yet published their results in a peer-reviewed journal, is currently studying the site. It is estimated that they have less than two years before wood-burrowing marine animals destroy the submerged forest.[12] "Still-usable prehistoric wood is often found in swamps as far north as New Jersey, and occasionally as far as Connecticut, although it is more common in the southeast. The bald cypress was designated the official state tree of Louisiana in 1963.[26] It is considered by some to be a symbol of the southern swamps. Cypress trees can be used in the making of shingles. Joshua D. Brown, the first settler of Kerrville, Texas, made his living producing shingles from cypress trees growing along the Guadalupe River of the Texas Hill Country.[27] Shingles produced from cypress were also one of the main industries for early pioneers in Kissimmee, Florida (near Walt Disney World). One of the main bodies of water in the area, Shingle Creek, is named in homage of their importance to the growth of the city."