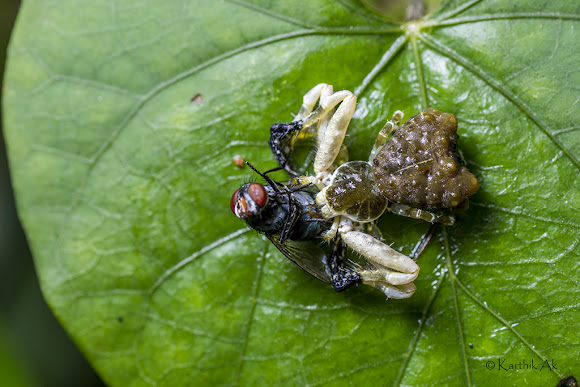 For humans mimicry is an art, but for many species mimicry is an adaptation, a mechanism programmed deep in the DNA which enables a species to survive in a world where survival is not easy! This biological mimicry can be seen in single cellular organisms and multi-cellular organisms. The most common predators of spiders are birds, geckos, wasps, spiders, other insects and fungi! The spiders has various adaptations to escape from the predators. Once such adaptions is to mimic as the feces of its prime predator. Here you can see one such adaption. A spider mimicking as a bird shit!! A crab spider evolved to mimic the bird shit/dung to avoid being preyed upon by the birds. Came across this species in bangalore on a leaf along a path. The spider was seen in that particular place for 3 weeks and disappeared. The last time i saw it had grown very huge. It fed exclusively on green bottle fly. I'm not sure if the spider was choosy in its prey or perhaps it was just a co-incidence! Whatever it be it was amazing spotting. Will share the close up image in a few days.