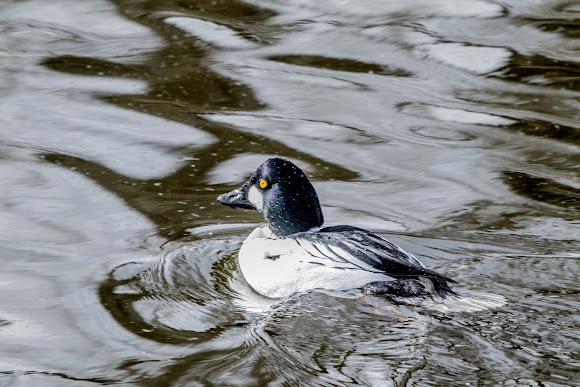 medium-sized sea duck with a triangular head and a sloping bill. The body is mostly white with white windows along the flooded wing. The male has a iridescent green, with a round white spot behind bill. Females have a warm brown head that contrasts with it's gray body. Bill is mostly blackish, with yellow at the tip only.

Common Goldeneyes breed mainly in the boreal forests of Canada and Alaska, with smaller numbers in North Dakota, Montana, Minnesota, and the Northeast. They nest in holes in trees near lakes, rivers, or wetlands. Typical breeding sites feature lakes with abundant invertebrate prey and clear water offering good visibility and little emergent vegetation, although they may feed in stands of bulrush. Migrating birds stop to feed on large lakes and rivers en route to their main wintering areas along the coasts. In winter, look for Common Goldeneyes in shallow coastal bays, estuaries, and harbors along the Atlantic, Gulf, and Pacific coasts that offer good foraging sites: sand, gravel, rock, and boulder substrates supporting mollusks and crustaceans. In the interior, wintering flocks gather on large lakes and rivers as far north as open water occurs, and in ice-free areas created by industrial or power-generator discharge of warm water.