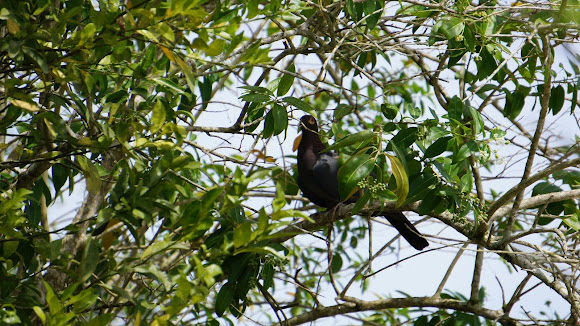 The scaly-naped pigeon is a large slate grey pigeon (14–16 in), with maroon coloured plumage around the neck. The plumage on the species' nape appears scaly, explaining the both the common, and scientific name of the species. There is a bare patch of skin which surrounds the birds red eyes; this patch tends to be reddish in males and more yellow in females. The legs and the base of the bill of the species are red, while the remainder of the bill is light coloured.

The range of the Scaly-naped Pigeon includes both the Greater Antilles and Lesser Antilles. The species tends to occur in rain forests, however it may also be found in drier lowland woodlands; the species is locally common near human settlements.

Interesting spotting Ranier ,congrats,thanks for sharing and welcome to Project Noah :-)
I hope you like the site us much we do,there are many features you can explore,first you should read the http://www.projectnoah.org/faq where you have all the "rules" of Project Noah :-)
You have also a blog http://blog.projectnoah.org/ where we post articles from our best specialists in the diferents areas and also storys of wildlife "adventures" from our most knowened users.
There are also the chats for elp in the id process and to comment your's and other's spottings.
Attention when join local missions http://www.projectnoah.org/missions they have a range that is in the mission map,see first that before join.you only can submit spotting in a mission if the photos where taken inside the mission range.
Enjoy your self,see you arround :-)