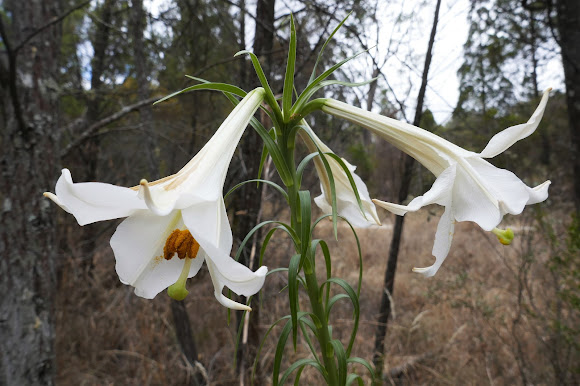 Lilium formosanum, also commonly known as Taiwanese Lily, is a herbaceous plant species in the lily family Liliaceae, and is endemic to Taiwan. It has trumpet-shaped flowers, unbranched stems growing up to 2 metres tall (this single specimen was about a metre), and narrow, elongated leaves (up to 20 cm long and 10 mm wide) that are stalkless and hairless. In Australia, despite it being widely cultivated as a garden ornamental, is considered an invasive species. November Lily or Easter Lily (Lilium longiflorum) is a similar species to Formosa Lily, but with shorter and broader leaves, and without a purplish tinge on its flowers. However, as is the case with this spotting, the flowers of L. formosanum are not always flushed with colour and can also be completely white. I definitely think a comparison of the leaves is the easiest way to tell the two species apart.

Spotted along a track in native bushland adjacent to the freshwater Quart Pot Creek, in the township of Stanthorpe, SEQ. A weed of wetter sub-tropical and temperate regions, although drought conditions currently prevail. This escaped garden plant grows along roadsides and in bushland, grasslands, disturbed sites and waste areas. Lilium formosanum is regarded as a major environmental weed on Lord Howe Island and Norfolk Island, and as an environmental weed in Victoria, New South Wales and Queensland.

I don't think Shanna would mind me linking to her spotting. Both are of Lilium formosanum, but the colour difference between the two is vast - https://www.projectnoah.org/spottings/10... The flowers in my spotting are completely white, whereas Shanna's have a purple stripe. Plenty of variation within the species for two spottings only about 55 kms apart.