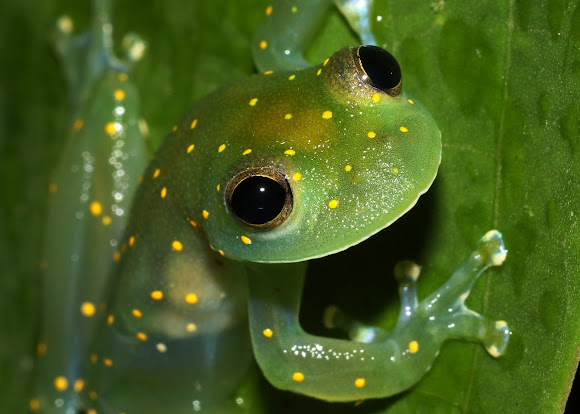 Sometimes known as the San Jose Cochran Frog. This beautiful little frog (about 30mm SVL) is a stunning green, more blue/green on the dorsal surface becoming lighter over the limbs and a translucent green over the belly area. Frogs entire dorsal surface and limbs covered in small bright yellow spots or tubercles. Lower hind and fore legs are fringed with white, with white webbing between toes. Iris is ivory/gold with a fine gold ring around pupil. It also has a fine white line running around the lip.

This is considered a forest montane species found up to 1650m. This spotting however was made at about 200m barely a km from the coast near the settlement of Baha Solano in western Colombia in the department of Choco. Found in foliage about 2m above a small forest stream at night.

Found in Costa Rica, Panama and NW Colombia. Now considered rare in the former but still reasonably common in Colombia. The Latin name euknemos refers to the fringed limbs and means 'with beautiful legs'. There are 20 described species in the genus Cochranella to date, making up part of the more general description of Glass Frogs. Ref: AmphiaWeb - Cochranella euknemos, The Book of Frogs - Tim Halliday.

Thank you all so much for your comments. Am thrilled to get a 2nd placing with little guy.

Congratulations. Incredible photo and a great example of one of life's amazing creatures

Thank you Leuba and Christine.

Thank you Jonathan, Jill, Bhagya and Rach for your comments and support for this spotting. Much appreciated.

Thank you Daniele for the SOTD, it's made my day!

Congratulations , for the SOTD. GREAT Pictures and information

Congratulations Robert, this marvelous tree-frog is our Spotting of the Day:

"Marvel at the exquisite Fringe-limbed Tree Frog (Cochranella euknemos), our Spotting of the Day! When Project Noah contributor triggsturner first spotted this frog at night in Colombia with a flashlight, it looked to him as if it was covered with tiny stars. This species of frog in the family Centrolenidae (glass frogs, so-called because of their transparent abdominal skin) is known from lowland and montane areas of Costa Rica, Panama and Colombia. The IUCN (International Union for Conservation of Nature) Red List of Threatened Species indicates that there has been no recent sighting for this species in Costa Rica".

Thank you flowntheloop and Irena for your comments. Glad you enjoyed.

Thank you Sarah, Jim and Felix for your supportive comments. Jim, I try to keep a mix of everyday species with other special ones I find both here at home in NZ and around the globe. I especially appreciate your comment, thank you.

Another unique and interesting posting, Robert. Well deserved recognition based on the below responses...I always look forward to the next from you!

Thank you Chief, Leuba, Rach and maplemoth662 for your great comments and support of this spotting. Glad you all enjoyed this beautiful wee critter.

Thank you Daniele for your comment. I have to say that at night in the flashlight it looked like it was covered in tiny stars. A bit whimsical perhaps but I have never seen this species before and was amazed by it.