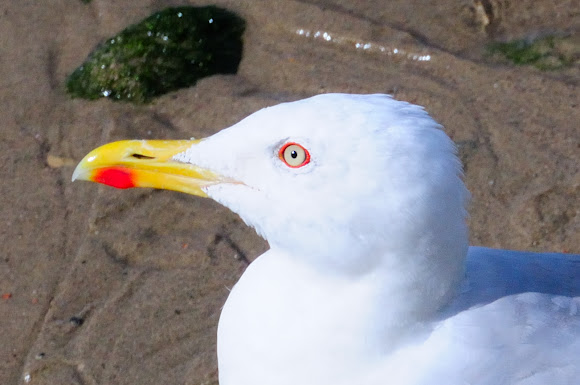 Large gull which has only recently achieved wide recognition as a distinct species. It was formerly considered as a subspecies of the Herring Gull, L. argentatus. The Yellow-legged Gull is a large gull, ranging in length from 52 to 68 cm in total length, and 120 to 155 cm in wingspan. Adults are externally similar to Herring Gulls but have yellow legs. They have a grey back, slightly darker than Herring Gulls but lighter than Lesser Black-backed Gulls. They are much whiter-headed in autumn, and have more extensively black wing tips with few white spots, just as Lesser Black-backed. They have a red spot on the bill as adults, like the entire complex. There is a red ring around the eye like in the Lesser Black-backed Gull but unlike in the Herring Gull which has a dark yellow ring.