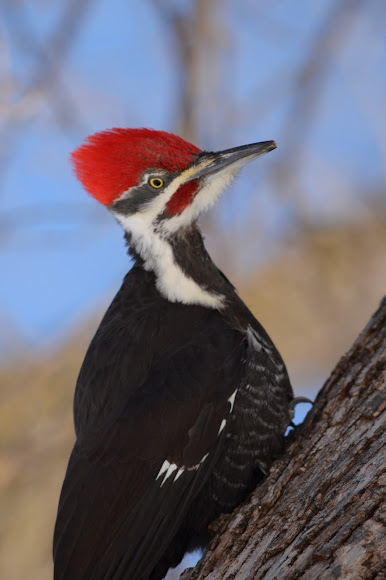 On a tall tree, 20 feet + from a birch tree with a hanging, beef suet basket

The park nearby stopped putting out food for the birds this year so I think we're getting the park's adult Pileated as well as our own coming to our suet this year. I've seen numerous males chasing or being chased out of the yard (territorial?) as well as extra females. It has also been a colder than average winter with more snow than normal as well. The cold temperatures may be making them hungrier or more aggressive in protecting their food supply or perhaps just the limited amount of food available. Either way I've gotten closer and better images of Pileated Woodpeckers this year than in previous years in winter as a result. Typically late fall is a good time for getting closer images as they seem food obsessed or driven to locating and eating or storing insects. At the time this image was taken I was dressed from head to toe to fight the bitter cold and was sitting on the ground on top of perhaps 1 1/2 feet of snow in our front yard. This male flew in and was waiting to eat at the suet feeder behind me while another male was actually on said feeder. He appeared to be waiting his turn or waiting to see if the other male would notice him. He did and the two soon flew away. This all happened in a matter of maybe two or three minutes. Eventually one of the two males returned to eat but I can't tell the males apart to know which one was the victor.