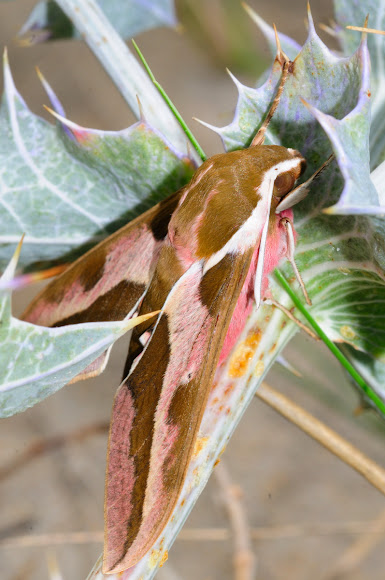 Big Sphingidae moth with grey forewings with an almost square olive-brown blotch. At the base it has another olive-brown blotch near the middle, and a long oblique band of the same colour, commencing in a point at the extreme apex of the wing, and gradually growing wider until it reaches the margin, where it is very broad. Hind wings are pink, with a black blotch at the base, and a black band half-way between this black blotch and the margin, with a snowy-white blotch at the anal angle. The thorax and the body are olive-brown coloured, with a white line on each side of the thorax just at the base of the wings. This line runs on each side along the head just above the eye, and the two meet at the nose; the body has on each side at the base two square black spots and two square white spots, and beyond them, nearer the apex, and also on each side, are three white lines. The caterpillar is very big and with vivid colours.

Spotted at sand dunes near the coast.