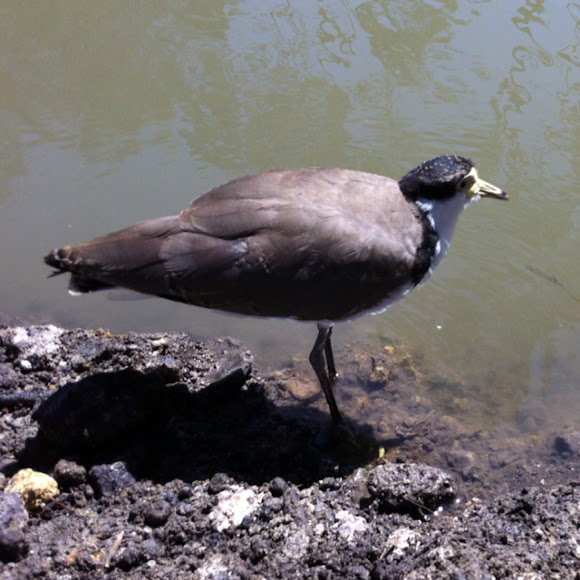 Description: Masked Lapwings are large, ground-dwelling birds that are closely related to the waders. The Masked Lapwing is mainly white below, with brown wings and back and a black crown. Birds have large yellow wattles covering the face, and are equipped with a thorny spur that projects from the wrist on each wing. The spur is yellow with a black tip. The Masked Lapwing has two subspecies resident in Australia. The southern subspecies has black on the hind neck and sides of breast, and has smaller facial wattles. Northern birds are smaller, without the partial black collar, but have a much larger wattle, which covers most of the side of the face. The sexes are similar in both subspecies, although the male tends to have a larger spur. Young Masked Lapwings are similar to the adult birds, but may have a darker back. The wing spur and facial wattles are either absent or smaller in size. The southern subspecies is also known as the Spur-Winged Plover. Size Range: 33 cm to 38 cm

Habitat: The Masked Lapwing inhabits marshes, mudflats, beaches and grasslands. It is often seen in urban areas. Where this bird is used to human presence, it may tolerate close proximity; otherwise it is very wary of people, and seldom allows close approach. Distribution: The Masked Lapwing is common throughout northern, central and eastern Australia. Masked Lapwings are also found in Indonesia, New Guinea, New Caledonia and New Zealand. The New Zealand and New Caledonian populations have been formed from birds that have flown there from Australia.

Feeding and Diet: Masked Lapwings feed on insects and their larvae, and earthworms. Most food is obtained from just below the surface of the ground, but some may also be taken above the surface. Birds are normally seen feeding alone, in pairs or in small groups. Communication: A loud "kekekekekekekek". Mating and Reproduction: Masked Lapwings may breed when conditions are suitable. Both sexes share the building of the nest, which is a simple scrape in the ground away from ground cover. This nest is often placed in inappropriate locations, such as school playing fields or the roofs of buildings. Both sexes also incubate the eggs and care for the young birds. The young birds are born with a full covering of down and are able to leave the nest and feed themselves a few hours after hatching. The Masked Lapwing is notorious for its defence of its nesting site. This is particularly the case after the chicks have hatched. Adults will dive on intruders, or act as though they have a broken wing in an attempt to lure the intruder away from the nest. Breeding Season: Any time of year Clutch Size: 3 to 5 Went walking in the Valley Lake Conservation Park, Mount Gambier, South Australia. When on the trail I noticed this beautiful Plover sitting on the boardwalk, at first I thought "the silly thing has planted eggs there" but we were able to get closer and closer, we got so close I could reached out and touched it if I wanted. I find this behaviour confusing as it did not appear injured or destressed in anyway, and made no attempt to get away from us. Due to the few slightly brown feathers on the head between the black, I think this might be a young Plover maybe 1 year. I think this because of the time it takes for feather change and the lack of crisp clean colour on the legs. Information came from: http://australianmuseum.net.au/Masked-La...

Yah, I've noticed that very same thing now that you mention it!

I've seen lots of singles and pairs this summer but no babies. Maybe the mini-drought has put them off.

No this was the only one, I was very aware of the potential for being attacked but nothing came, much to my relief! :-)