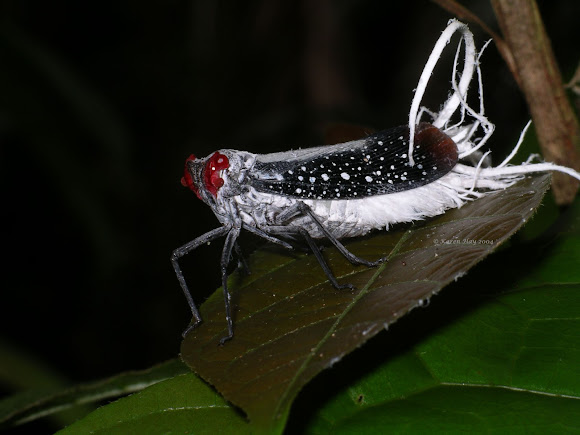 Found on leaf-litter during jungle walk along the Amazon near Iquitos, Peru.

After a LOT of searching and dead-ends, I contacted Eric Eaton (Kaufman Field Guide to Insects of North America) who recognized it as a fulgorid and connected me to Lois O'Brien, an authority on fulgorids. Lois O'Brien's comments: "You have 2 beautiful pictures of Lystra lanata Linnaeus! I've never seen one alive, but they are in almost every museum, including mine (by trading), because they are so beautiful all entomologists collect at least one. I don't know what Lystra means, but lanata, of course, comes from lana meaning wool. There is a second species in the genus that has the white wooly spot on the back reaching to the side (costal) edge of the wings, and it is named pulverulenta. When Linne named it he called it Cicada linata, and apparently thought it was from India! Our catalog (1947) now lists it from French Guiana and Surinam to Brazil (and Jamaica and China, which are both unlikely) but does not list Peru. It was supposed to have been illustrated by Sulzer in 1776 in a German paper, and by Stoll in 1781-maybe the books were rare. Anyway, the tail is produced by the insect from pores in a "wax" plate, and the cells that produce it have been illustrated. Females and nymphs seem to produce more than males, and chemically it is not a wax, several esters composed of a 30-40 carbon alcohol and 30-40 carbon acid. Essentially the same stuff scales make. It is used to cover eggs often-repels water, and sometimes parasitic insects. One paper said it let the insect slip out of a spider web. Anyway, maybe 5-6 genera and 20 species grow it this long. In one species in Mexico, the Indians told Hogue, I think, that the insects flew into the sky about sunset and the rays flashed on the "wax" so the insects looked like giant snowflakes. If you want to read about some myths about the giant fulgorid, the peanut bug Fulgora, from South America, Ed Ross did a paper called Fearsome Fulgora in Pacific Discover 47(3):19-23. It was supposed to zig-zag through the forest killing everything it touched, for one thing. And if you are interested in the group, I did a paper on The Wild Wonderful Word of Fulgoromorpha in Denisia, published by a museum in Austria on Auchenorrhyncha, the jumping Homoptera." NOTE: Lois and her husband recently donated their vast collections to Arizona State University. See http://www.npr.org/sections/thetwo-way/2...

Thanks a lot! The insect in my header is a Flatidae nymph, thats as far as I could get with an ID.

Thank you, Dan! Lucky you to have seen this species several times
- and other fulgorids also! (Is that one I see in the header to your doucettesphotos page?). As far as I know this is my one-and-only. BTW, some beautiful photos on your page!

Congrats on Sotw! I love the Fulgorid bugs, I've seen this species a few times in South America. Great story and great links. I'm reading The Wild Wonderful World of Fulgoromorpha. It's hard to find good info about this group of insects, so this is really interesting.

lots of notes! awesome find. i even think it's kind of cute!

Congratulations yahk66. Great story of discovery. An inspiration to all of us with unknown spottings! Well done.

Daniele, thank you for the SOTW. What an honor, and a real inspiration to learn and do more! It is a small world - it was around 2009 that I contacted Eric through AllExperts and he got me on track. (THANKS Eric!) That was after 5 years of hunting on line, talking to people, and one prior (unsuccessful) attempt through AllExperts. It was exciting to finally get the answer - and a privilege to hear it directly from Lois.

And Thank You, Mark and Antonio, for your kind words!

Awesome find yahk66 ,a rarety,congrats on the well deserved SOTD and thanks for sharing

Congratulations Karen, this gorgeous Fulgorid Planthopper and the great story that goes with it have been voted Spotting of the Week! Did you know? Eric Eaton is actually on our rangers team :-)

"This gorgeous Fulgorid Planthopper (Lystra lanata) with red eyes and a rooster-like tail is our Spotting of the Week! The fragile, wax-like plumes are made from carbohydrates found in plant sap and are used for protection. From our spotter Karen Hay: "After a lot of searching and dead-ends, I contacted Eric Eaton (author of the Kaufman Field Guide to Insects of North America) who recognized it as a fulgorid and connected me to Lois O'Brien, an authority on fulgorids". Check out the spotting to read the interesting details Karen received from Loris O'Brien. We're lucky to have Eric Eaton in the Project Noah rangers team.
Lois O'Brien and her husband Charlie recently donated their vast insect collection to Arizona State University. Read more about it here: http://buff.ly/2sFm7yo".

Thank you, Ashley, for the nomination... And Mark and Leuba for your comments. :)

yahk66, thanks for sharing this interesting spotting. Great find !

Happy to share the info, Daniele. It was so exciting to see this Planthopper - I had not a clue what it was, but it was so beautiful perched on the ground, and that turned into a ballet when it fluttered off! Lois was so kind in briefly corresponding with me - and I am sure the information she gave is difficult to find on-line! It was a special treat for me. And I was so pleased this morning to discover a little more about her and their gift to Arizona State University!

Thanks you so much for this and the fantastic notes Karen!