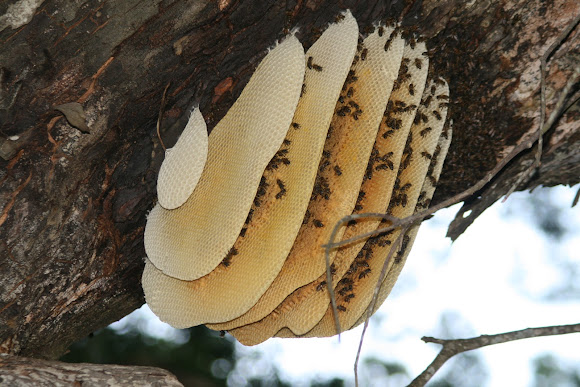 Apis mellifera capensis, the Cape honey bee or Cape bee is a southern South African subspecies of the Western honey bee. They are unique among honey bee subspecies because workers can lay diploid, female eggs, by means of thelytoky, while workers of other subspecies (and, in fact, unmated females of virtually all other eusocial insects) can only lay haploid, male eggs. Not all workers are capable of thelytoky- only those expressing the thelytoky phenotype, which is controlled by a recessive allele at a single locus (workers must be homozygous at this locus to be able to reproduce by thelytoky).n 1990 beekeepers transported Cape honey bees into northern South Africa, where they don't occur naturally. This has created a problem for the region's A. m. scutellata populations.[2] Reproducing diploid females without fertilization bypasses the eusocial insect hierarchy; an individual more related to her own offspring than to the offspring of the queen will trade in her inclusive fitness benefits for individual fitness benefits of reproducing her own young.[3] This opens up the possibility of social parasitism: if a female worker expressing the thelytokous phenotype from a Cape honey bee colony can enter a colony of A. m. scutellata, she can potentially take over that African bee colony.[4] A behavioral consequence of the thelytoky phenotype is queen pheromonal mimicry, which means the parasitic workers can sneak their eggs in to be raised with those from the African bees, and their eggs aren't policed by the African bee workers because they're similar to the African bee queen's eggs.[5] As a result the parasitic A. m. capensis workers increase in number within a host colony, while numbers of the A. m. scutellata workers that perform foraging duties (A. m. capensis workers are greatly under-represented in the foraging force of an infected colony) dwindle, owing to competition in egg laying between A. m. capensis workers and the queen, and to the eventual death of the queen. This causes the death of the colony upon which the capensis females depended, so they will then seek out a new host colony.

This hive started out in a woodpecker's nest (Probably Knysna or Cardinal Woodpecker) which was carved out into a Outeniqua Yellowwood. Once space became a problem inside, continuing outside was the logical choice!

Very interesting. Cheers for the description, and of course for the excellent photos.

Nice one Nielien! This is your best spot yet!! So interesting!

Thank you everyone! Bees are by far my favourite insect. Wonderfully organized, ultra clean, produce a variety of products and unbeknownst to them pollenate plants for provide food for humans and animals alike!

This is awesome & so interesting!

I suggest you put one of the last two photos first to draw the eye!