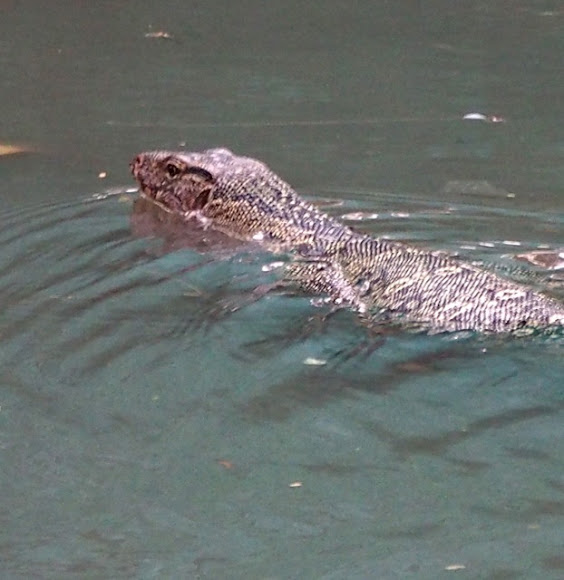 To 3.21 meters long. Snout to base of tail is up to 1.1 meters. A massive, intimidating lizard, one of the largest in the world. The heaviest individuals can weigh over 50 kilograms. Body is grey to black, often with varying spots and chain patterns of yellow-to-tan that fade with age. Neck is long and head is long and somewhat flattened. Has a notably large forked tongue that it often extends to sense its environment. Tail is higher than it is wide and very strong. Underbelly is somewhat lighter than rest of body.

As their name implies, Water Monitors are almost always found near water, including rivers, lakes, swamps, canals, and beaches. As long as water is available they can be seen in a wide variety of habitats, including forests, grasslands, mangrove swamps, islands, and agricultural areas. They are most common in coastal regions and become increasingly rare the further inland you go. They are very good swimmers and are known to swim long distances in the ocean, which can lead to the colonization of new islands. They are also good climbers and are often seen resting in trees at heights up to 10 meters. The Water Monitor has adapted well to urban environments and can often be seen in Bangkok’s parks, canals, and garbage dumps.

spotted in a very dirty water channel in Bangkok.

thanks ZebulonHoover for the ID...