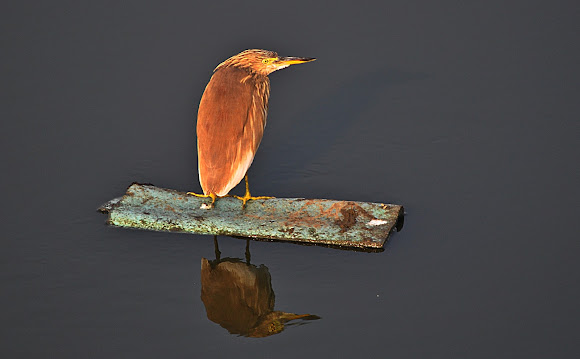 Indian pond-heron (Ardeola grayii)...The Indian pond-heron is an elegant bird with white-grey plumage, a brown stripe on its back, and a yellow beak with a black tip.. Fascinatingly, its legs change colour in the breeding season, turning from green to bright yellow during the months of March to September Some individuals even have red legs; a feature which has been reported in about two percent of the population in southern and western India Most of the time the Indian pond-heron is very quiet, but it can omit a harsh croak - :

has become extinct in Kuwait .....has a very large range, being found across most of the Indian subcontinent, including Bangladesh, India, Bhutan, Sri Lanka, Pakistan, Myanmar and Nepal -

The varied diet of the Indian pond-heron includes small fish, frogs, crabs, other crustaceans, aquatic insects, grasshoppers, crickets, ants, and baby turtle -and it may also consume substantial amounts of plant matter. It is a stealthy hunter, stalking its prey by walking slowly toward it or by standing still, awaiting the chance to ambush -

Nice photo. I love that wading birds are often photographed with their mirror image in the water.