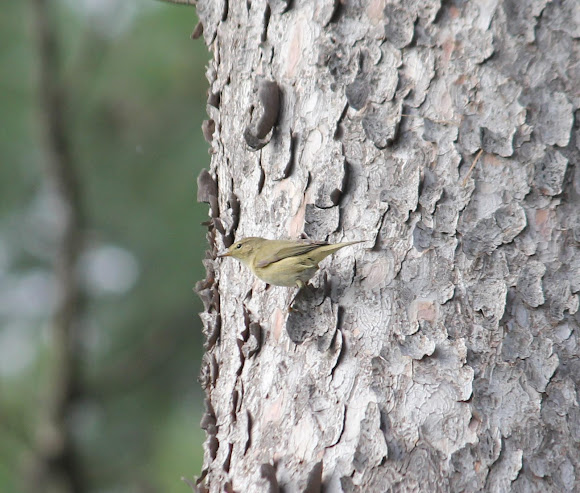 The common chiffchaff is a small, dumpy, 10–12 centimetres (4 in) long leaf warbler. The male weighs 7–8 grammes (0.28–0.31 oz), and the female 6–7 grammes (0.25–0.28 oz). The spring adult of the western nominate subspecies P. c. collybita has brown-washed dull green upperparts, off-white underparts becoming yellowish on the flanks, and a short whitish supercilium. It has dark legs, a fine dark bill, and short primary projection (extension of the flight feathers beyond the folded wing). As the plumage wears, it gets duller and browner, and the yellow on the flanks tends to be lost, but after the breeding season there is a prolonged complete moult before migration. The newly fledged juvenile is browner above than the adult, with yellow-white underparts, but moults about 10 weeks after acquiring its first plumage. After moulting, both the adult and the juvenile have brighter and greener upperparts and a paler supercilium

It is migratory, but it is one of the first passerine birds to return to its breeding areas in the spring and among the last to leave in late autumn. When breeding, it is a bird of open woodlands with some taller trees and ground cover for nesting purposes. These trees are typically at least 5 metres (16 ft) high, with undergrowth that is an open, poor to medium mix of grasses, bracken, nettles or similar plants.