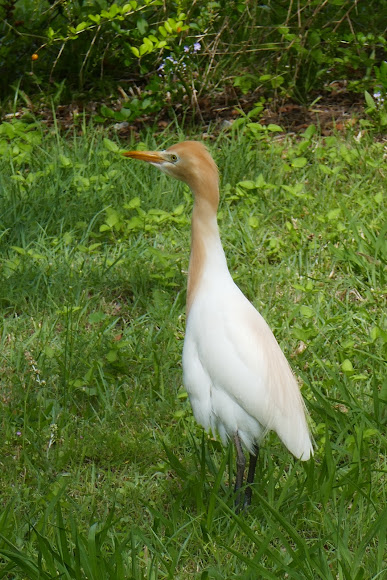 The Cattle Egret is a small member of the heron family Ardeidae. Despite the similarities in plumage to the egrets of the genus Egretta, it is more closely related to the herons of the genus Ardea. The Cattle Egret is small, stocky and mostly white with a short neck and stout yellow-red bill. During breeding and courtship, the species has a heavy jowl, orange-buff crown, neck, breast and mantle. There is a marked seasonal variation in plumages during the breeding and non-breeding seasons. Needless to say, this spotting wears its breeding plumage. The name Cattle Egret comes from its association with cattle; namely its habit of eating ticks and flies off the backs of livestock, which extends to other large grazing mammals. This is a cosmopolitan species found worldwide, and its rapid expansion is primarily due to wider human farming.

Most commonly seen foraging with grazing stock and in wetland areas, although this specimen was spotted in a suburban backyard in Brisbane. First-time visitor to my yard.