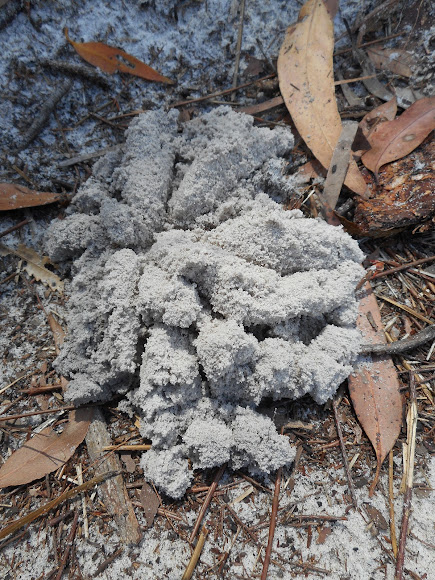 I saw this phenomenon in only two areas along the track, where sand has been expunged from the burrows creating finger-like formations, both in size and shape. I can only suggest these are caused by crabs which inhabit the area. Perhaps Soldier Crabs (Mictyris longicarpus) have done this, as the other holes nearby were small enough to have been made by them. I have never seen Soldier Crabs inland though, only on the beaches, tidal flats, and mangrove areas. Another species worth considering is the River Swimming Crab (Varuna litterata). Both are marine crab species known to occur in freshwater, and being excellent swimmers, are able to move with the currents along the coast. Both species occur in southeast Queensland, particularly in the Brisbane region.

Cheers to my chief spotter Nathan Faldt, and his keen eyes.