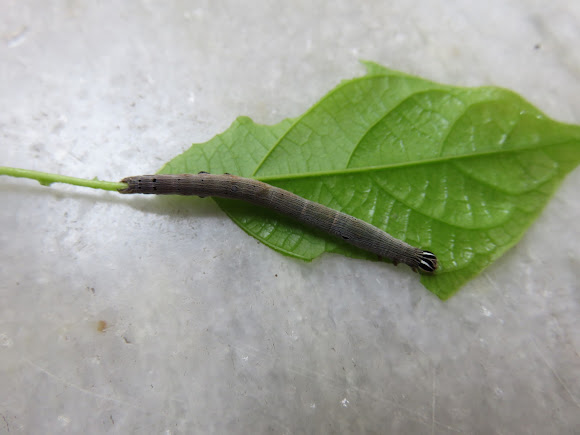 Looks like a thin twig or a piece of bark.

I noticed that the leaves of my Rangoon creeper (Combretum indicum) had been eaten...I knew it was the work of caterpillars but for the life of me I could not spot one; I was looking under the leaves ...suddenly I realized that just mm away from the place where I was holding the stem, was a caterpillar lined up longitudinally along the stem! Then I noticed 3-4 more. These were motionless when suddenly one of them galloped up to a leaf in a looping movement. Yet another one that was behind a caterpillar on the same stem raced ahead to actually overlap it (last shot) but by then the leaf had already been eaten anyway. When these caterpillars move, they move really fast...by the time I twisted the camera knob to the video setting it was too late. Why would it want to position itself on another caterpillar? I will never know.