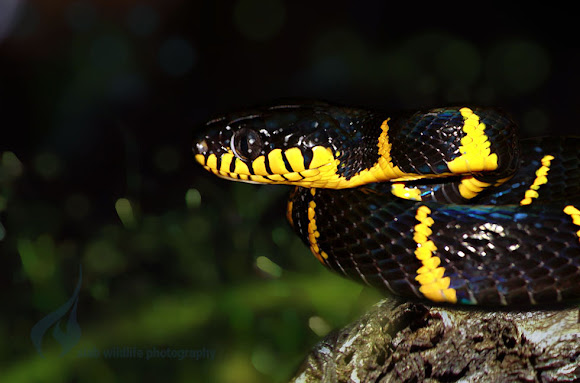 Boiga dendrophila, commonly called the mangrove snake or gold-ringed cat snake, is a species of rear-fanged colubrid from southeast Asia. It is one of the biggest cat snake species, averaging 6–8 feet in length. It is considered mildy venomous.Mostly nocturnal, it is a potentially aggressive snake. Even captive bred specimens can be nervous and may strike repeatedly. Although many specimens will calm down and allow handling, they are normally easily stressed and may refuse food for extended periods of time if disturbed. (Handling, of course, should involve safety precautions for the handler, due to their nervous nature and the fact that a bite can cause pain and injury.) Wikipedia

This is a nice picture of a snake right