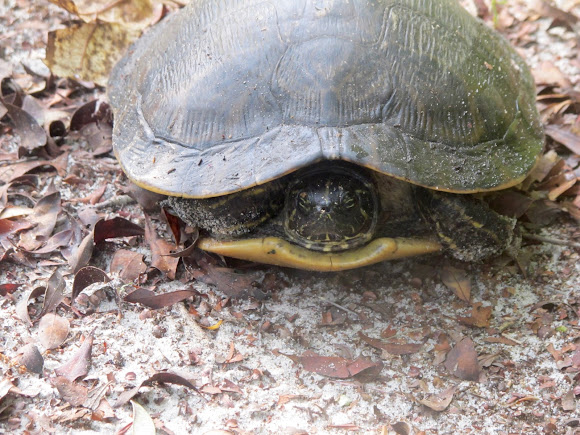 A large freshwater turtle with a smooth, dark colored carapace. The carapace is a ark black with brown markings running throughout. The turtle's face has yellow stripes along the cheeks and neck, a pattern also seen on the legs. The plastron was completely yellow with no markings, which distinguishes it from other Pseudemys species (other cooters). The flatness and broadness of the shell also helps differentiate this species from Slider Turtles.

Found in southeastern United States from Florida north to lower Virginia and west to Alabama and the tip of Louisiana. Lives in freshwater habitats and can frequently be seen basking on logs or rocks near bodies of water.

Seen at George L. Smith SP in Georgia. Just sitting on the path, probably moving from one pond to another one nearby.