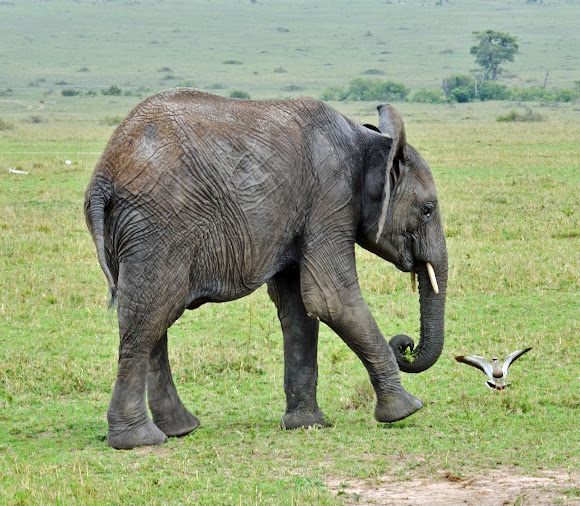 David against Goliath! Have a look at the whole series and find out why this pair of Crowned lapwings are so frantically agitating around this juvenile elephant.

Crowned Lapwings prefer short dry grassland for their nests, and can become aggressive and territorial. The elephant was "defeated" and moved on, and the eggs were safe. Photographed from the top of a vehicle from a distance using a telelens. For elephants in a neighboring area see http://www.projectnoah.org/spottings/736... Apologies for the quality of the short video (lots of shake, filmed at the long end of a 500mm zoom) but it gives an idea of the energy the bird was putting in keeping the elephant away.

This is brilliant, Daniele. These birds know no fear. I've seen them go for people, dogs, cars, ride-on lawn mowers... and now an elephant. They have earned my respect as protective parents.

Glad you liked it Caleb :-)

the only thing i want to know is WHY THE HECK DIDN'T I FAVORITE THIS EARLIER!!!!

Thank you Leuba and madalena. Glad you liked it!

love the series and the video

Just fantastic, Daniele. Just came across this one- belated Congratulations !
I am glad the elephant moved away. These lapwings seem the same all over the world - mad !!

A belated thank you to everyone for your comments!

Way to go Daniele! Another SOTD for ya! I just played the video of the bird and my cats immediately went crazy! :-)

Congratulations on this totally amazing spot. SOTD. Great job! Very interesting. Wonderful to have video too.

Daniele my friend :-) great capture,beautiful situation,congrats on the SOTD,thanks for sharing such a amazing spotting page

Thanks Claire and Nuwan!

That is a great series...the ground nesting birds sure have a tough way of it.
Congrats!

and 50 other people favorited this spotting