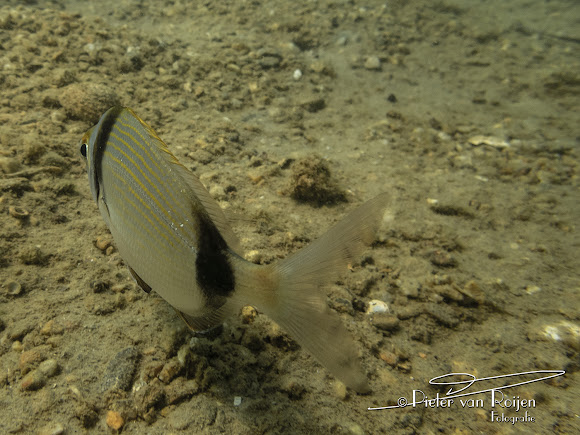 Diplodus vulgaris can reach a length of about 45 centimetres (18 in) with maximum recorded weight of 1.3 kilograms (2.9 lb). Body is generally grey-silver, with two well-defined vertical black bands, one close to the gills and one in the rear of the body, just before the base of the caudal fin. Another black stripe, less pronounced, is present near the eyes. There are golden lines along the body, typically on the back. Lips are rather thick. In each jaw, there are 8 narrow, light-brownish incisors. In the western Mediterranean, it reproduces in October and November and in the eastern Mediterranean in December and January. It is a gregarious species, sometimes forming groups composed even by many specimens. In the shallows, it often creates smaller groups even with other similar species. Adults feed on benthic invertebrates, crustaceans, worms and mollusks. It is considered an important food fish.

This species is widespread in the Mediterranean Sea, in the Black Sea and in the Eastern Atlantic Ocean, at depths of 0 to 160 m, more commonly between 0 and 30 m. It inhabits rocky, sandy bottoms and seagrass beds. On sandy bottoms, it can be often found following species that dig the sand and trying to steal their food.