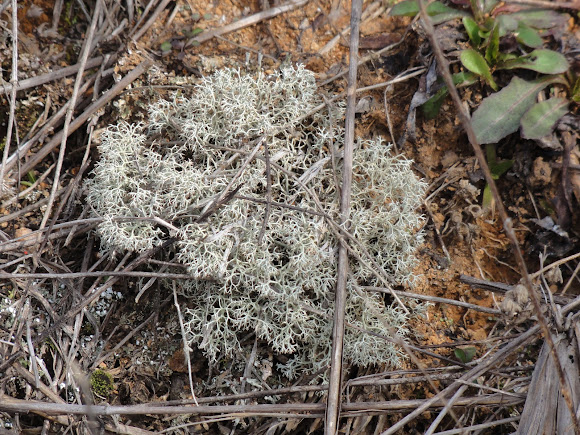 Cladonia rangiferina, also known as reindeer lichen (c.p. Sw. renlav), lat., is a light-colored, fruticose lichen belonging to the Cladoniaceae family. It grows in both hot and cold climates in well-drained, open environments. Found primarily in areas of alpine tundra, it is extremely cold-hardy. Reindeer lichen, like many lichens, is slow growing (3–5 mm per year) and may take decades to return once overgrazed, burned, trampled, or otherwise consumed This lichen can be used in the making of aquavit, and is sometimes used as decoration in glass windows. The lichen is used as a traditional remedy for removal of kidney stones by the Monpa in the alpine regions of the West Kameng district of Eastern Himalaya.[11] The Inland Dena'ina used reindeer lichen for food by crushing the dry plant and then boiling it or soaking it in hot water until it becomes soft. They eat it plain or, preferably, mixed with berries, fish eggs, or lard. The Inland Dena'ina also boil reindeer lichen and drink the juice as a medicine for diarrhea.

In Georgia, this species is found in the Piedmont & mountains of