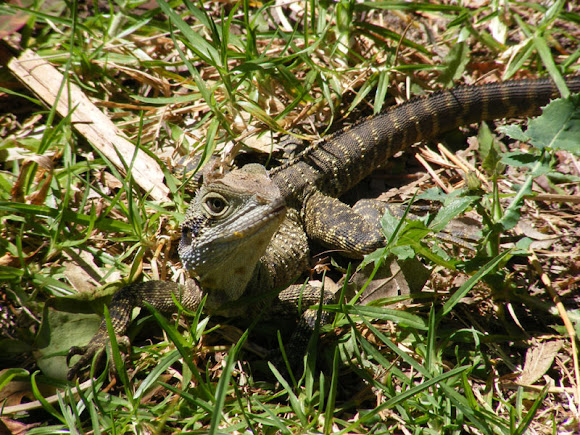 'Australian water dragons have long powerful limbs and claws for climbing, a long muscular laterally-compressed tail for swimming, and prominent nuchal and vertebral crests.[4] (A nuchal crest is a central row of spikes at the base of the head. These spikes continue down the spine, getting smaller as they reach the base of the tail.)[5] Including their tails, which comprise about two-thirds of their total length, adult females grow to about 60 cm (2 feet) long, and adult males can grow slightly longer than one metre (3 feet) and weigh about 1 kg. Males show bolder colouration and have larger heads than females.[6][7] Colour is less distinct in juveniles.[8]' from wikipedia

'As its name suggests, the Australian water dragon is associated with water and is semi-aquatic. It can be found near creeks, rivers, lakes and other water bodies that have basking sites such as overhanging branches or rocks in open or filtered sun. ' from wikipedia

Sun basking lizard about 30cm body length another 20cm or so for tail. Evenly spaced stripes across body. Dull greenish brown in colour. Probably a juvenille. Found in grassland on zoo grounds. Not an exhibit but a naturally occuring species, thriving in urban habitat. I have seen this species in the hippo enclosure at Melbourne Zoo.