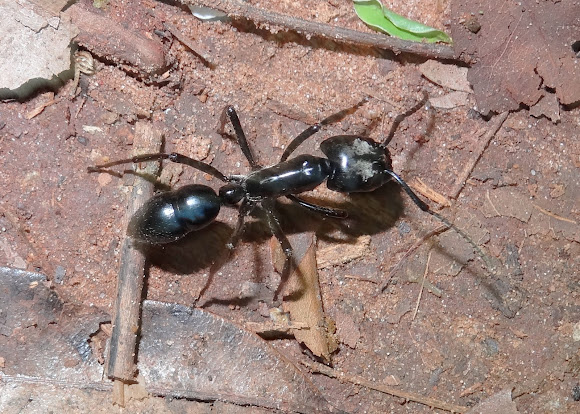 Large black ant with bluish lustre. As a group Dinoponera are known as Giant forest ants and contain some of the largest ant species. This one is a worker ant at around 300mm long. Body segments are smooth and on initial inspection the ant is hairless.

Lowland neotropical forest. Found in the states of southern Brazil, northwest Paraguay and eastern Bolivia. This one seen on the forest floor on the Brazil/Paraguay/Argentine borders.

This large ant was originally misidentified as a Bullet Ant. My apologies for any confusion. For those that are interested there are a couple of key id features. This ant has smooth body segments. Parponera clavata has a pair of blunt horns on the first segment of the thorax which on other ant this size has, and also has a sharp forward pointing triangular node on its waist. Ref: Myrmecos. I would like to thank PN member Gentleman 1986 for bringing this to my attention.

Thank you Gentleman 1986. You are quite correct and on further research I will amend this spotting. I took the initial ID from the guide I was with, my mistake. One of the things I appreciate about PN is in situations like this where pooled knowledge increases individual knowledge. Thank you again.

hi, this is actually an Dinoponera mutica worker

Thank you armadeus.4 I have been lucky enough to escape being stung by this particular species so far.

Woah...don't get stung by this little critter! Great shots! Thank you for sharing :)