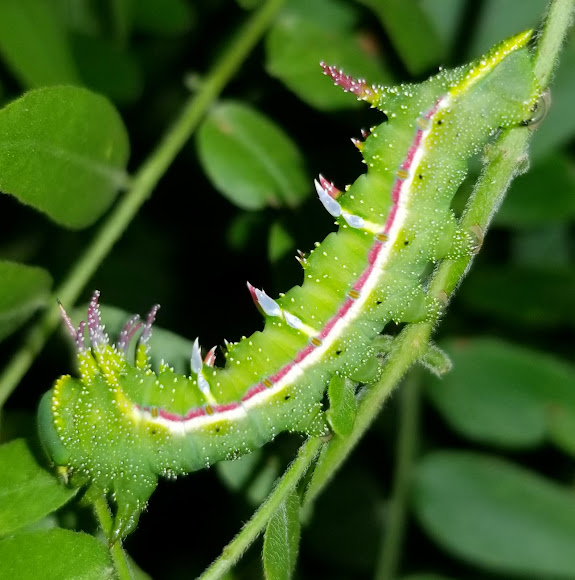 It is a medium sized caterpillar in the fourth instar. The Honey locust moth caterpillar has green skin decorated in small bumps and warts. Their is a red horn at the rear end with silver and red sided soft spines through most of the thoracic segments except for the head segment which has colorful horns. Right behind the head their is a small crescent protection rim, which is also slightly bumpy as well. A prominent stripe that is half white and purple runs down the sides of the body. The first six small legs near the head are it's true legs which make it through metamorphosis, the other legs are pro legs and are only their in the caterpillar phase.

The caterpillar were bred, but the population was from the Lake Lewisville area, near a wooded area along the bank of Lake Lewisville. The food plant is Honey Locust, or Gleditsia triacanthos.

These caterpillars used to be in the genus Sphingicampa, but was revised to Syssphinx in the past couple years. I had about 80 caterpillars that were laid by this moth, (https://www.projectnoah.org/spottings/88...). I had about 60 cocoons at the end, which were released to a forested area. The caterpillars can feed on two host plants but Kentucky Coffee tree seems to be a bad host while Honey Locust is great for them. The caterpillars became cocoons in about four weeks, and the moths hatched two weeks later. The genus Syssphinx is part of the Ceratocampinae, which include things like Eacles, Anisota, Adeloneivaia, ect.