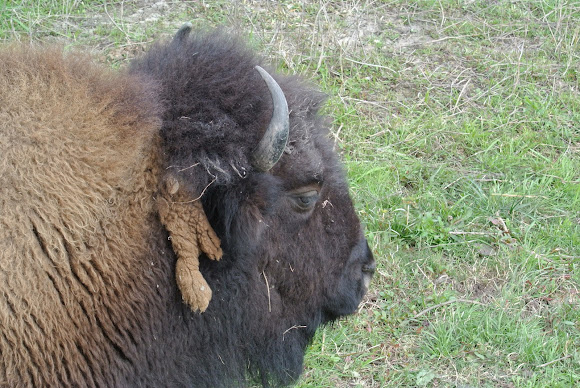 A bison has a shaggy, long, dark brown winter coat, and a lighter weight, lighter brown summer coat. Bison are herbivores, grazing on the grasses and sedges of the North American prairies. Their daily schedule involves two-hour periods of grazing, resting and cud chewing, then moving to a new location to graze again.

The Armand Bayou Nature Center has some captive animals for educational purposes. Upper Texas Coast (UTC 081) ARMAND BAYOU NATURE CENTER: A system of nature trails honeycombs the property, and the center operates a pontoon boat that plies the waters of Armand Bayou. ABNC staff and volunteers have spent countless hours restoring several hundred acres of coastal prairie, and grassland species such as Sedge Wren and Le Conte’s Sparrow are not difficult to find here. ABNC staff is available to answer questions about when and where to bird in the Clear Lake area.

The American bison (Bison bison), also commonly known as the American buffalo, is a North American species of bison that once roamed the grasslands of North America in massive herds, became nearly extinct by a combination of commercial hunting and slaughter in the 19th century and introduction of bovine diseases from domestic cattle, and has made a recent resurgence largely restricted to a few national parks and reserves.