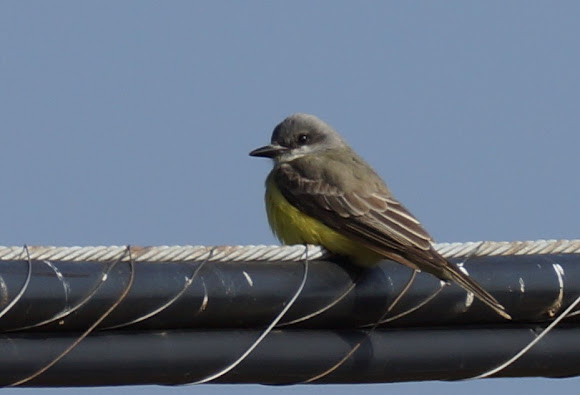 More native to the south-eastern states and down to South American, this vagrant is now showing up in California. Head is medium grey, back is a greyish-green and tail a dark brown. Faint black slash over eyes. Yellow underparts and white throat. Bill is long and thick. Both known as a song bird and a Flycatcher.

This one seems to favor young willows near water.

As I was observing the flycatching flights similar to a Black Phoebe, I was treated to a trick it showed me. From the wire it flew straight up in the air pretty far and then came down in an acrobatic tumble to land gracefully back on the wire.

Thank you Hemma. This is a rare sighting. Been a few so far in California. But if you check out the range, well they are not from our area. Mostly from Texas and south.