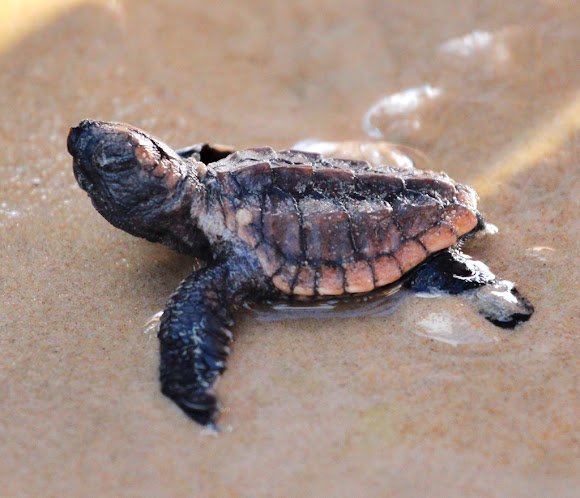 Classified as endangered by the IUCN, the loggerhead is the world's largest hard-shelled marine turtle. It grows to an average size of 90cm long and 135kg. These turtles have an average lifespan of 47-67 years but a low reproductive rate with females laying an average of four clutches of eggs over their lifetime.

Found in the Atlantic, Pacific, and Indian Oceans, as well as the Mediterranean Sea. It spends most of its life in saltwater and estuarine habitats, with females briefly coming ashore to lay eggs.

I was walking along my local beach this afternoon and was about to head back to the car when I noticed a crowd of people about a kilometre down the beach. I had to check it out... I walked down to see what was going on and found a tiny baby loggerhead turtle making its way to the ocean under the watchful eye of a Coolum District Coast Care Group volunteer and a large group of onlookers. These turtles make several nests along our beach each year, all of which are closely monitored by Coast Care volunteers, but this is the first time I have seen one coming down to the shore. I have included a shot of the Coast Care volunteer coaxing the turtle towards the water to give you a sense of scale. She told me that this little one was the last of its clutch and probably the weakest. It was tough going but I'm happy report that the little fella made it and swam off!

Right place at the right time! A big congratulations to this SOTD Shanna :)
Have a great day!

Oh my goodness, thank you so much everyone! kd - it's definitely close to the end of nesting/hatching season. I think most of the babies are out now. This one was the last of its clutch, according to the Coast Care volunteer who was there.

Congratulations Shanna on your SOTD

Congratulations Shanna! Love everything about this spotting :)

Well done Shanna. Must be getting close to end of nesting/hatching season in next month or so?

Congratulations on a super exciting spotting!

Congratulations, Shanna - wonderful set of pics and lovely story! thanks for sharing this.

Yes definitely congrats Shanna. I love the shot that Karen put on FB - flipping along the water's edge. A real feel-good spotting. :)

Congratulations Shanna! A tiny baby loggerhead turtle makes its way to the ocean in our spotting of the day!

Great series Shanna! Thanks for sharing :)

You're so lucky to have seen this! Lovely images.

Thanks Mark, Kerry and Selma. It really was wonderful to see, I was very lucky. I like the shots where he's making his way down the beach to the water - there were lots of people standing around but with my long lens I was able to wade out into the surf a bit and get some good clear shots without people in them.

So lucky to have seen something this special Shanna. I have yet to see it but have it on my bucket list for sure! The series is fantastic