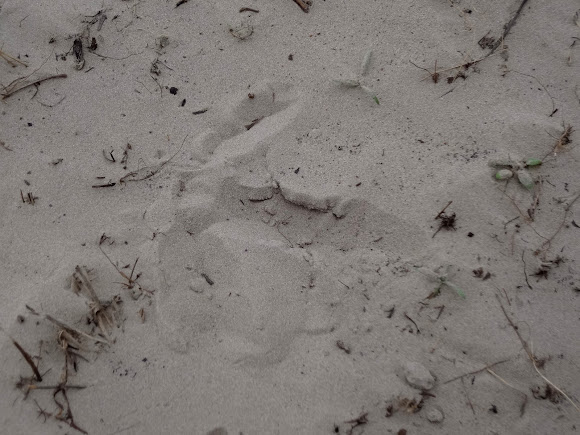 Whooping cranes are the tallest birds in North America, taller than Sandhill cranes, at about 5 feet tall, with a 7 foot wingspan. They are also all-white except for black wing tips (which you won't see unless they spread their wings). In contrast, Sandhills are buffy gray and do not have the black wing tips. Other distinguishing marks are often obscured by distance, however they have red skin on their heads, and gold eyes. Juveniles are rusty-cinnamon that fades to white. All whooping cranes are descended from a remnant population (15-16 individuals) that migrated from Northern Canada to the Gulf Coast of Texas. Conservation efforts have managed to bring the population up to about 300. The only wild flock still migrates (without assistance) from the nesting grounds in Canada to the wintering grounds at (and around) Aransas NWR. Whoopers can be observed at the Refuge during winter months only.

Whooping cranes depend on open marsh habitat. In Canada, their nesting grounds are located in freshwater marsh in northern Alberta at Wood Buffalo National Park. On the Gulf Coast of Texas, they forage in salt water marsh. Cranes also depend on recently burned areas for winter forage, and eat a variety of prey items including: roasted acorns, crispy critters, and roots. Freshwater for drinking is an increasingly dear resources for cranes during the winter months. They will often commute to find waterholes with fresh water, which exposes them to increased predation. The Aransas NWR provides maintained dugouts with windmills in order to allow the cranes access to freshwater. On the migration route, cranes often forage in abandoned ag fields.

Although this photo is of a footprint, yes, I am sure that it is from a Whooper and not a Sandhill. Suffice to say, I saw many birds when I worked at Aransas. Please don't message me with an argument about whooping cranes. I'm a herper, I'm just posting this because I think its a good photo to post. And I'm not going to offer any opinions about anything controversial or give you any inside information.